The simplicity that makes up a Nancy Drew mystery is just too much for today’s generation to handle. It’s not the poor girl’s fault she isn’t the apple of every tween girl’s detective eye nowadays. Nancy just hasn’t aged with her audience. She doesn’t have the social media sites or the cell phone or any of the fancy gadgets that sleuths use today. Nancy’s decline in popularity begs the question: who, if anyone, can live up to today’s expectations of a teenage investigator?

C.L. Gaber and V.C. Stanley, both having a history of professional journalism, try to tackle this quest with their new novel, Jex Malone. Jex is a sixteen year old girl raised in a single parent home in New Jersey. She wasn’t born in a single parent home; in fact she wasn’t even born in New Jersey. Jex is originally from the outskirts of Las Vegas in Nevada, her mother being a professor and her father being a well-known detective. But her father’s claim to detective fame is his good looks and also, unfortunately, his inability to solve the disappearance of a young girl who vanished into thin air. Jex’s father’s obsession with the case is ultimately what led to her parents’ divorce.

Due to her parents’ custody agreement and the powerful threats of a judge, Jex is forced to spend the summer of her sixteenth year with her father in Nevada. She has never spent more than one or two days there and she doesn’t feel right calling a man she hardly knows “Dad”. But alone in her father’s rancher, Jex tries to make her own fun by exploring his old case files with a group of neighborhood girls. The curious teenagers soon make a discovery of a certain case file that is close to all of their hearts, especially Jex’s. The case file belonging to Patty Matthews who disappeared thirteen years ago, leaving the neighborhood in fear and Jex’s family in ruins.

The four girls decide to start their own private investigator agency, The Drew-Ids, a tribute to their literary hero, Nancy Drew. As they investigate Patty’s disappearance, they discover many dangerous people and places, with a few scary leads. Will they solve the suspected murder or will they become a part of a case file themselves?

Jex Malone is a great novel for tween girls who are desperate for a good mystery. Gaber and Stanley’s writing is at times stereotypical of today’s teenage generation, but that can be expected due to the target audience. All readers, tweens, teens, and even a few adults, will delight in some of the laugh out loud humor that can be found within the book. A good attempt at a Nancy Drew for the new ages, Jex Malone proves to be funny, captivating, and overall a good, enjoyable read. 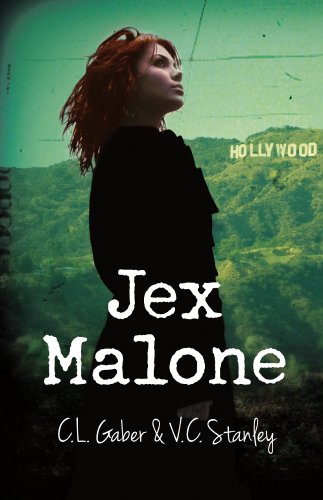