Love and Chaos by Gemma Burgess

Although it can be read by a vast majority of age groups, Young Adult Literature is primarily for those amidst their teenage years. And Adult Literature, most commonly referred to as “regular” fiction, is mainly read by those aged twenty-five plus. But what about those twenty-somethings, what do they have to read? Well, it isn’t well-known, but New Adult fiction does exist. It isn’t the largest collection by far, but this genre can be seen expanding at your local library and independent bookstores due to the fact that more and more authors are taking note in the lack of twenty-something stories.

One author in particular has taken the reins on renovating this genre by publishing a relatively new series entitled The Brooklyn Girls. Gemma Burgess is detailing the lives of five grads- Pia, Julia, Coco, Madeleine, and Angie- who are sharing a brownstone and starting their lives in New York City. Fresh-out-of-college women will revel in this series and will identify with one if not all of Burgess’s characters.

Each novel Burgess writes for the series focuses on one of the five friends. The first novel, titled after the series name, focuses on Pia and the second and most recent book, Love and Chaos, focuses on Pia’s best friend Angie. The two girls have been friends for as long as they can remember. All of their tears, laughs, and senseless ideas have been shared together except now Pia is busy with her successful job and serious relationship. And the other girls in the brownstone have found their lives equally chaotic due to their own failures and achievements.

With her parents looming divorce and her money dwindling, Angie needs to figure out how to pick herself up from rock bottom. Finding herself and figuring out who she wants to be is the only viable option. But how is she supposed to do that when she’s recovering from crazy parties and bad dates, suffering through a job at the Gap, and figuring out if she’s found true love? The help of her friends make it all seem possible, even though with their own problems, they aren’t the most attentive to Angie’s life.

Although some of the situations Angie gets into are a little unbelievable, readers will find the novel entertaining. Comical and cute, Love and Chaos proves to be a fun and quick summer read. Post-grads and even some pre-grads will love Angie and her friends and will no doubt want a brownstone of their own someday, complete with wild adventures, a load of laughs, and a little true love. 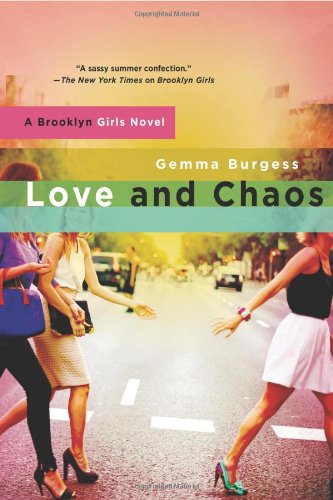