This just in: Madison Brooks Murdered! Reporters all around flock to Hollywood to capturing this gut wrenching story. It seems as if A-list celebrity, Madison Brooks, a girl that came to us with nothing, left this world with a bang, so it seems. With a blood drench dress, and a no alibi, Aster Amirpour is the number one (and only) suspect. All Aster wanted was to become famous, to see herself and Madison as equals in their A-list world. But after being publicly seen on Madison’s (well now ex) boyfriend’s arms when Madison publicly broke up with him (for good reasons) but with her retreating back (covered by an overtly-protective Tommy) being the last time anyone seen Madison alive, and Aster’s dress covered in blood in the hotel laundry room, all eyes point to her.

Jail. There are worst ways you can make fame. For Aster becoming a promoter has been just the start. See saw herself in the Hollywood hall of fame, winning Oscars and Golden Globes, maybe even staring in the next blockbuster movie – you never know. When gorgeous Ryan promising to help her out, show her the back door into the life she always wanted, without hesitation, clung to Ryan like she was Rose from Titanic, and Ryan was the door. She never meant to piss Madison off, but the opposite, she wanted to become best friends with her, so maybe going after his boyfriend was not the best idea after all.  With Ira paying Aster bail, and setting her back up in a top-notch hotel, Aster is not off the hook yet. With her trial date approaching, Aster needs to swindle her friends (and by friends she means Layla and Tommy) into helping her clear her name, and find Madison, wherever that Hollywood elite is hiding.

If Unrivaled made you puke at the character’s personality, this one is no better. Where Alyson Noel truly dives deep into this Hollywood world, it is enough to make you puke. Layla, being the worst character, does not get any slack in this novel. Where she is upset with her and Mateo break up (because that is what their break is), instead of putting herself into the job she ‘won’ she slacks off, making her boss, Emerson believe she does not deserve working here. Still top’s off for Layla for being a friend, as she decides to help Aster on her quest to clear her name, even breaking into Madison’s house to see if there was any evidence the police did not see. Still how would Madison feel about Layla being in her house? As Ryan once told her: “She kept a blacklist of people who dissed her. You were on it”. Being a writer of a celebrity trash blog is not smiled upon in this world, and if Layla wants to swim with the fishes, she better hopes she’s the biggest one out there. Lucky for her when he is not saving other girls, Tommy is the first to throw protection up Layla’s way. Yes, our hometown boy still crushing hard on Layla, and even more now with her boyfriend out of the way. Still Layla does not feel the same about Tommy, luckily for her, he is willing to play the long run just to win her over, which is how Tommy finds himself back in Aster and her murder trial case, all for a shot at the girl who keeps pushing him away.

The point of view Noel chose to tell this from was: Layla, Aster, Tommy (our three heroes), Madison, Mateo (oh yes he is not done yet), and our favorite reporter: Trena. Yes, they all play a part in this novel (and hopefully the upcoming one). Noel’s writing was similar to the first book: preppy, common, leaving this story to run at a fast pace. The plot is still interesting, as the main plot in the series is in the works, and the subs-plots are working themselves out. Although the character’s themselves are not the highlight of the story, it is interesting the world Noel create for them. These eighteen-year-old (well Tommy is nineteen) kids are running around, owning night clubs (even though drinking age is twenty-one in the states), and no one is batting an eye. I guess that’s true in Hollywood, the younger you are, the more fame you get, and the more tabloids you can get into. Where Ira is a firm believer is no publicity is bad publicity, I do not believe he meant that about a murder in his most popular club. With the date ticking down, Layla, Aster and Tommy, the most unlikely friends, are running out of time to find Madison, and by this rate, they are more likely to find her dead than alive. 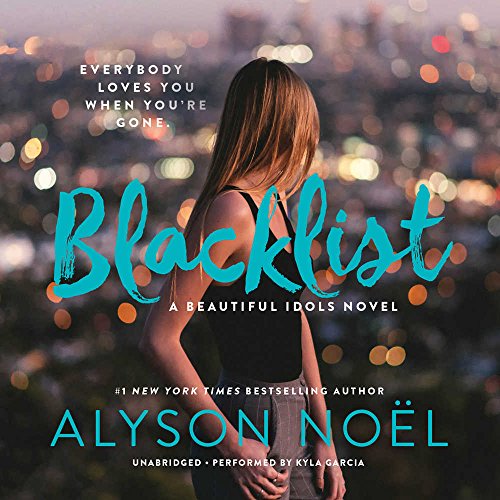 She kept a blacklist of people who dissed her. You were on it