When My Name Was Keoko | TeenInk

When My Name Was Keoko


Korea, 1940. Of course, I wasn't exactly there, but through the words of Linda Sue Park, I was there. When My Name Was Keoko by Linda Sue Park narrates a story of family, secrets, lies, and the desperate times of World War II that call for desperate measures. The story ' told from both Sun-Hee's and Tae-yul's point of view ' captures the attention of many middle-school students, and deserves my two-thumbs-up.

Once Korea is captured by the Japanese, everything in the Kim family goes awry. Despite the forced change of names, confiscation of various household items, and the decreased food rations, the Kim family eventually gets separated. Uncle runs away after Sun-Hee mistakenly gave a false warning. Tae-yul is drafted into the military to help uncle by turning the eyes of the government away. Sun-Hee stays at home dealing with the guilt of causing Uncle to leave which in turn caused Tae-yul to leave. You just cannot stop turning the pages with these plot twists one after the other and the writing style of Linda Sue Park.

As I mentioned before, Park effectively changes between Sun-Hee's and Tae-yul's point of view, generally rotating between each chapter. By doing this, Park displays two different writing styles: the strict formal writing (Sun-Hee) and the more carefree and slang-y writing (Tae-yul). Furthermore, this provides more character development as you are shown ' not told ' that Sun-Hee enjoys calligraphy and Tae-yul is more fascinated by mechanics. Moreover, you can see which views are biased, and which views are plain facts; as an added bonus, you can enjoy the natural sibling rivalry between Tae-yul and Sun-hee.

Also, When My Name Was Keoko has interesting facts on World War II while giving the novel a plot. When taught about WWII, we usually focus on what happened in the US and major battles. Who would've thought of little Korea and their troubles? Isn't it more important to focus on like Japan or something? Instead, Linda Sue Park shows us how it felt to be Korea, where everything wasn't perfect. Where life wasn't easy. Where it was hard just to simply put a meal on the table.

Linda Sue Park, like everyone else, isn't perfect. (If she was, many authors would go out of business.) In fact, this novel has many flaws. The writing style is quite repetitive, as various techniques are obviously visible and somewhat forced. The plot doesn't really have a plot line, but thousands of events that pile up on each other. Many characters lack development, and you meet a new one within every chapter.

On almost ' no, on every page of the book, you can find thousands one-word fragments and italicized words. Yeah, sure, they aren't that bad, but once you start being abusive, it's pretty irritating. Scratch that. Really irritating. It's like, 'Okay we get it. You want to emphasize some points and words. Chill out. Seriously. There's no need to make all the pages look funny,'

There are some books that actually build up the plot, creating an actual plot line. These books you just can't put down no matter the circumstance. There are some books that actually list events after event. For one, The House of the Scorpion simply names the events of Matt as he grows up. Similar to the The House of the Scorpion, When My Name Was Keoko simply names the events. Even when writing the summary for this book review, I found it hard to give a decent summary without telling you (yes, you the reader) too much information.

Linda Sue Park introduced many well-thought-out-but-didn't-exactly-come-out-correctly ideas ' and characters. Throughout the span of the story, Sun-hee meets many new friends: Tomo, Mrs. Ahn, Jung-shin, and Hee-won, to name a few. These friends don't get their fair share of 'space' in the novel. They are plainly touched upon, thrown on the ground, and trampled into the dirt.

Despite my harsh criticism, When My Name Was Keoko is a good book. Linda Sue Park effectively changes narration between Tae-yul and Sun-hee, creating another road to think about. Also, Park gives decent background information on what the Koreans felt during World War II ' not what we felt. However, the writing style of When My Name is Keoko gets quite irritating, the author didn't develop the plot, and many characters aren't expanded on. In conclusion, When My Name Was Keoko is a I-have-nothing-really-better-to-do-on-a-rainy-day book that will keep you up reading. 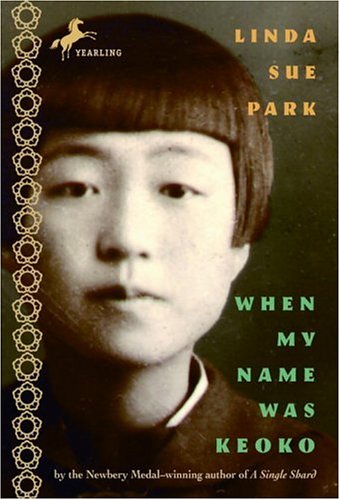