The Infinite by Nicholas Mainieri

Eighty-five hurricanes don the earth each year, according to NASA. Some out at sea, some just minor storms, but it is the devastating ones that rake the lands, destroying everything in its path, are the ones you have to worry about. Hurricane Katrina took the western world by storm in August of 2005. Category Five (the highest) with the highest wind speeds of 280km/h, the storm killed over eighteen hundred people. It was devastating to all areas affected by the hurricane, some more than others. In the United States, with so many areas affected there is only so much relief and money to repair what the storm damaged. Places like New Orleans never recovered, and might never. The hope was sucked dry from the city, and not even the miracle of young love could survive.

Jonah McBee decorated his house with pictures of his family. A habit his father did not like, but now that Jonah was on his own, all he wanted was to see the smiling faces of his family. There are only a few memories Jonah had of his whole family: his mother, father, oldest Bill, and second oldest Dex, then he; Jonah. When he was little his mother died in a car accident, causing his father to grow cold hearted. Few years later, Bill graduated and joined the military, a common thing boys did, only to be killed by a land mined on his first tour of Afghanistan. Dex grows cold and distance, moving away, it was not till their father died of a heart attack, did Dex come back to do the rearrangements. Left in the world of only Jonah and Dex, Jonah was not surprised that once Jonah turned eighteen, releasing Dex up from his guardianship that Dex left, leaving Jonah and his pictures to finish out his final year of high school. Jonah dream was to help rebuild New Orleans, by opening up McBee Auto Shop again, a store that closed after the hurricane. With no money the shop stayed that, a dream. His only friend Colby, knew he was going to join the army fresh out of high school, and Jonah went along half heartily with his best friend’s plans. Where on the side Colby sold drugs, a common past time kids in New Orleans did, that could get him arrested if found by the police. The only thing stable in Jonah messed up life was Luz, his girlfriend. Luz was an illegal immigrant from Mexico, who followed her father to New Orleans for work. Going to school was a challenged as she barely knew any English. Yet with Jonah helps her, Luz began a relationship with Jonah, joined the school track team and became one of the best runners, and praying to her deceased mother, as well as Jonah’s mother to keep their life safe, as she and Jonah made plans for the future.

Her ghost runner was always with her. Picking up speed Luz felt her presents just below her hip, pushing her forward, trying to outrun her. Where the other runners were trying to beat the person next to them, Luz had her own competition, one that pushed her ahead of the other girls, trying to outrun her. It was the presents of her ghost runner along with Luz newfound information that made her lose the four hundred meter dash, the only race her father watched her run. Her newfound information that she was pregnant with Jonah’s child. She told Jonah, who promised they would work it out, but when telling her father, he was not pleased. Yelling, saying he would send her to her grandmother’s in Mexico he left the house. Coming back hours later, broken and bloody from being mugged, Luz could not break her father’s wishes and began packing for Mexico. Knowing things were going to be ruff, Luz never expected that on the car drive from the airport to her grandmother’s house the driver and other passengers would be caught and Luz is taken prisoner by the Cartel, and taken up into Mexico’s drug war. Jonah, after not hearing from Luz takes a road trip down to Mexico to bring her and his child home, where Luz does what she does best: run, and runs away from the cartel, Jonah, her ghost runner, and herself.

A brilliant debut by Nicholas Mainieri! This story tells a tale of young love between Jonah and Luz, as well as family problems from both Luz side and Jonah’s. Taken at the point of view of both lovers we got to see the world of New Orleans from a young man, as well as an illegal immigrant women's side of things. Mainieri’s story revolved a lot about culture and how that affected the youth of the city. The post-hurricane Katerina world of New Orleans bough a lot of drugs in the lives of many of the young trying to make some money (Colby). The hurricane brought up workers from Mexico (Luz and her father) some legal but most illegal for work that was running out. The war of Afghanistan that took the lives of many Americans (Bill) and how the loss of a family member made some distant (Dex) and let other’s feeling alone in the world (Jonah). The livid and horrors of Mexico drug war brought to life, the horrors of what it does to the people, brought before you by Luz eye. The writing was fast pace, switching between Luz and Jonah, with the chapters divided up into short parts. A passionate read of young love, drug wars, and fighting for your life, this book brings tears to your eyes, and an ending that is worth the crying for. 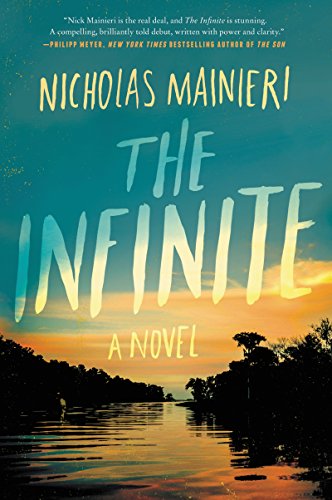 Previous Next
Reviews
Prince Across the Water by Jane Yolen and Robert J. Harris
By Elizabeth Hammond
Carlsbad, CA
Reviews
All American Girl
By saltyprengles BRONZE