The Last Battle (The Chronicles of Narnia #7) by C.S. Lewis | Teen Ink

The Last Battle (The Chronicles of Narnia #7) by C.S. Lewis

Narnia, a land we all grew to love. A land of the free, one accepting of everyone no matter what. Sure there is evil, every land has some, yet Narnia has heroes who help fight whenever Aslan needs them. These heroes are children, who come from a strange land. From the first two, to the four siblings who took Narnia out of the ice ages, then the cousin and the friend who rescued the missing prince. These friends have not been seen in Narnia for more than a hundred years, but will make one last appearance in the last battle for Narnia.

King Tirian is the late King of Narnia. All was fine in his country until Centaur Roonwit came to tell him that an ape, Shift, was speaking for Aslan, but that is a lie, as the stars tell him that Shift was evil. Believing is to be seeing, as King Tirian, along with his best friend, a unicorn named Jewel, went to see Shift and the supposed Aslan. It was worse that Tirian feared. Shift was pretending to be the speaker of Aslan, and told the talking beasts that Aslan was angry with them. Aslan, happened to be a donkey dressed in a lion's skinned coat, made by Shift, was kept in a stable all day; until his nightly parade around the fire, showing the beast, that he, Aslan, was real. Unbelieving, Tirian stood up to Shift, who was selling the talking beast to the King of Calormen, landing him tied to a post and ready to be killed. Praying to the real Aslan, wishing the children from another land will come back and help him become in control of Narnia once again.

Jill and Eustace along with the Pevensie siblings, Digory and Polly were having one of their “Narnia Dinners”. See being the only people in their world to visit Narnia, it made it quite hard to talk about it with anyone, without them thinking you went insane. Thus the eight of them would get together and talk about their time in Narnia. Or should I say seven, Susan, feels she is too old and grown up to believe in Narnia anymore, making fun of the imagination her sibling has, and in Aslan eye’s no longer a friend of Narnia. Suddenly in the middle of the dinner, Tirian appeared like a ghost and left without saying a word. A day later, on the train, Jill and Eustace found themselves being pulled off the train, as the next second they were standing in front of King Tirian. Together they helped him escape and came up with a battle plan to stop Shift.

C.S. Lewis let us know the book was going to be the last with the title: The Last Battle. From the start of the story something was wrong with Narnia. Nothing you could name, but the whole land seemed like it was dying. Unlike the other Narnia books, this one kept an upbeat attitude thought out the story, making it go by fast. This story had two points, one good and one bad, and although it might spoil the ending, these points have to be told. The good is that it ends on a happy note, with all the characters that have ever been to Narnia, and were no allowed to return, were back, and allow to stay. So it was nice getting in touch with the like Peter, who we have not seen since book four. The bad part, well, it killed the series, leaving a bad taste in your mouth. The whole Shadowland part killed it. Basically, as Aslan explains it to the children, their world and that Narnia were mere shadows of what the world was truly like. The reason why they are there though is because they shadowland selves have died. “‘There was a real railway accident,’ said Aslan softly. ‘Your father and mother and all of you are - as you used to call it in the Shadowlands - dead.” In other words, they are dead, and this new Narnia, the supposed real Narnia, is their heaven. To me, that ruined the series. All this work (seven books about it) creating this magical world tied to their England, was destroyed with the “ha-ha just kidding here’s the real one” That C.S. Lewis wrote to finish the last book. It was sloppy, made up ending, giving readers hope that they could save Narnia, only to rip that hope away as the world died, but do not worry because that was the model, here is the real thing. Still at least the gang is all back together, reading for many more adventures in Narnia, the land of the free, talking beast, and grand adventures. 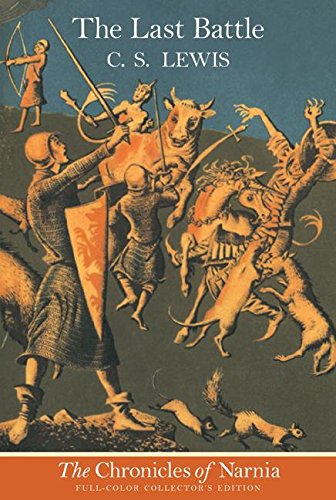 The end is finally here!