Because I'm Worth It by Cecily von Ziegesar | Teen Ink

Because I'm Worth It by Cecily von Ziegesar

Oh, how troublesome life can be on the Upper East Side? From what show to go to during this year’s Fashion Week, to early acceptances to universities, the seniors truly have only one thing to count on: parties. Yes because by this point there is nothing left for them to do. No clubs to sign up for, no fundraisers to impress the universities’ with, and no time for your parents’ to build a new wing for the library. The decision is out of their hands, leaving our group to focus on other things (except Blair because that girl never quits) like love as Valentine’s day is coming up, and everyone is looking for someone to share that special day with.

Let’s talk about our girls first shall we? Blair and Serena are not getting along. Ever since Serena started dating Blair’s step-brother Aaron, the two gals just stop clicking; not as if they were a good pair before. Serena, although is happy, she has the world at her feet, a modeling gig to perform at, high school is well behind her as her university plans are all set out. All she has to worry about is loving Aaron, and having fun. “That was the great thing about being so beautiful and so carefree. It didn’t, matter who you were with or what silly thing you were doing – you always had a fabulous time.” When Serena was off having the time of her life, Blair, being Blair, had a meltdown. Ruining her chance at Yale, she was given a second shot. A co-worker of her father, also a Yale alumni, was going to put in a personal recommendation for her, and wanted to meet her out for drinks, but when he turned out to be hotter and younger than expected, Blair had a hard time keeping it in her pants. Jenny and Vanessa own lives are thrust into difficult situations as Jenny makes a friend, who likes her more than a friend, and Vanessa’s who’s life and relationship are both thrown into the spotlight.

And now for our lovely boys. Starting out with the one who appears the least: Chuck. In the television show Chuck was a big deal, but in the books? Not so much. Chuck appears randomly throughout the story with no true content, with the only talk is people speculation weather or not he is gay/bi. Nate is busted for some weed, and is sent to rehab, which may not have been the worst decision of his life as there is a princess there just waiting to meet him. Aaron is alone, with no Blair to help him, as he tries to stay cool and collected as his girlfriend takes the world by storm. Lastly but not least Dan who’s poem was published got him more of a response than he thought, causes him to make a life changing decision, one he hopes not to regret.

Cecily von Ziegesar is the queen of writing trashy teen novels. Not going to lie, I love them! Perfect for the poolside, these summer novels, only 230 pages, these books take you to the high life of the Upper East Side. Taking place in February the novels spend a lot of time talking about love, and by love I mean sex, lust, and relationships. The gang has their usual drama, with a bit of break ups and kiss ups, but in the end, we know no real harm can come to them, after all they are the rich kids. The writing was the same, kind of sloppy, but kept the plot moving, with the short chapters and no wait time to see what happens next. It is a fun novel to read, as you cannot set it down, keep waiting to see what crazy stunt Blair will pull off, who Serena will bat her beautiful eyes at, and what type of characters will we meet next. 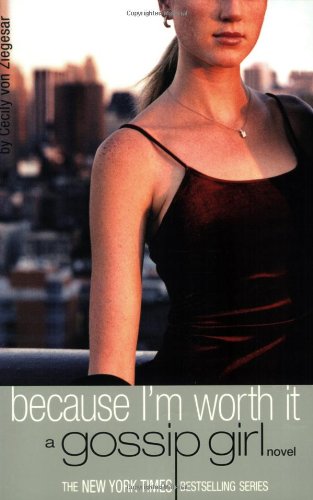