The Sword of Summer (Magnus Chase and the Gods of Asgard, #1) by Rick Riordan | Teen Ink

The Sword of Summer (Magnus Chase and the Gods of Asgard, #1) by Rick Riordan

The Norse gods, also referred to the Viking gods, live in a place called Asgard. In their myths there are nine worlds from theirs, which is Asgard (home of the Aesir), Vanaheim (home of the Vanir), Jotuheim (home of the giants), and Midgard (home of the humans) to many more (actually five more to be exact). The leader of Asgard is Odin (also refer to as the all-father) is the father to many but his most famous son is Thor. Where the movies made the gods heroes, it is not so true in this story where they leave Chris Hemsworth in the scenes, and show you the true myths about Thor.

Magnus Chase is a normal homeless person. After two years on the streets he’s normally seen in downtown Boston, picking food from the trash, breaking into rich people’s cars, and hanging out with his other two homeless friends: Blitz and Hearth. What is different was how he became homeless, when his mother was murdered by a wolf with glowing eyes, with her last words being “Don’t trust Uncle Randolph.” When Randolph came along, Magnus had two choices: going with him to find about his past, or get caught by his other uncle and cousin who were hanging up missing posters around the city. Caught in a rock in a hard place, Magnus decided to go with Randolph, in hope that whatever he could do would lead Magnus to his mother, and Randolph’s sister: Natalie. What Randolph told him was their family were connected to the Norse god’s with his father being one of them. Randolph was there to get Magnus to rescue the Sword of Summer from the ocean. Randolph was not the only one looking for it as the fire giant Surt was waiting for Magnus. Fighting bravely Magnus tackled Surt into the water, taking a ball of asphalt in the gut. “FLOOM! I hit the water. Then I died. The end.” Was how Rick Riordan finished a book in forty-seven pages.

Before Magnus hit the water, he saw a girl on a flying horse diving towards him. So it was not that much of a surprise when he woke up in a hotel bed with no scarring from the accident. He was in the Hotel Valhalla, which holds the lives of dead hero’s Odin felt worthy enough to help him fight when Ragnarok (doomsday) comes. The girl on the horse was Samirah al-Abbas (Sam for short), daughter of Loki, and was a Valkyrie, whose job is to choose heroes who enter the hotel. Sam chose Magnus as someone who was worth to stay in the hotel. Yet when the head table saw how Magnus “sacrificed” himself they were not impressed, yet nerveless when a soul enters the Hotel Valhalla, no matter what happens, it cannot leave, the Valkyrie who chose the hero can be pushed, this causes Sam to lose her job, and the ability to fly. When given his prophesy Magnus knew what to do, teaming up with Heart, Blitz and Sam, he was going to rescue the Sword of Summer, and stop Ragnarok from happing, at least for a little while.

Rick Riordan I was disappointed with this book. Do not get me wrong, I am a big fan, and enjoy all mythology, but this book did not cut it. First off you based its way too much off Percy Jackson and the Greek gods’ series. From Chapter 48 titled: Hearthstone Passes Out Even More than Jason Grace (Though I Have No Idea Who That Is),  it felt that the Kane Chronicles was not as successful for you, so you decided maybe if you incorporated the Percy Jackson’s characters it will boost up sales for Magnus. The other incorporation is it just so happen that Magnus has a blonde hair, stormy grey eye, female cousin, who saying she can help him, whose last name is Chase and first name Annabeth. Hmm I wonder who that could be. As a fangirl I would love a Percy and Magnus mash-up, but not one that obvious. The other issue I had was the consistency of Blitz and Hearth. Blitz full name is Blitzen, Hearth is Hearthstone, yet Rick Riordan keeps using both equally as much.  “Blitz was right. I was starting to see double Blitzens and double Hearthstones, and I didn’t think it had anything to do with illusions.” Just be consistent with your writing, as they teach children in middle school. The last issue I found was sarcasm was just too high throughout all points in the book. Sure it was nice to see Magnus be sassy to the gods, but what got me, was the gods being sassy back. The Norse gods became a regular people whenever they talked to Magnus do to their language, losing all power and vision I had for them. It was not a bad book as you got to see friendship (with little to no romance) between Sam and Magnus as it was their vs. the world as Magnus learns about his identity and who he truly is. 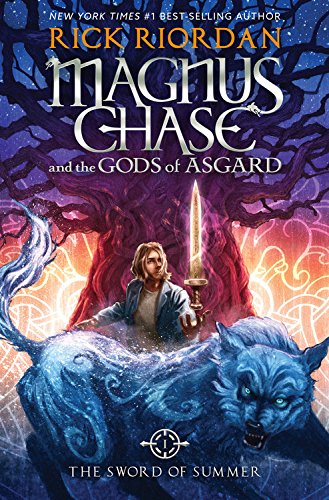 Gods lost their power when they started talking like teenagers.

Previous Next
Reviews
Confusions in MUCH ADO ABOUT NOTHING
By Jovin Panthapattu
Congers, NY
Reviews
Looking for Alaska
By Sierra Valencia
San Fransico, CA
Reviews
The Devil in the White City
By Caity Nagel
Princeton, IL
Reviews
Harry potter and the order of the phoenix
By lani hulse
Prosser, WA
Reviews
Vegan,Virgin,Valentine
By Rishika Prakash
Prosser, WA
Reviews
One of The Hideous Books Where the Mother Dies
By Mika Brannan
Kasson, MN