Brain on Fire by Susannah Cahalan

Brain on Fire by Susannah Cahalan is a memoir written about Susannah herself, who in early 2009, as an accomplished journalist for The New York Post undergoes an astonishingly rapid deterioration of her physical and mental well-being, starting off with seemingly common flu like symptoms. However, over the course of merely a week, she has a sudden outbreak of seizures, limb numbness, decreased motor control, cognitive deficits, mood symptoms, and psychosis. This sudden descent into raw, dark insanity is disconcerting, yet it lets in an undoubtable sense of interest.


Due to the neurological nature of her condition, Susannah barely remembers anything that had happened during that blackened month of her life. Because of this unfortunate circumstance, Susannah had to rely on conducting interviews with her family, friends, boyfriend, and medical professionals as well as video footage and medical notes in order to precisely recreate this disconcerting time. Utilizing her journalistic background, she executes this with a profound amount of  eloquence.


With that being said though, I do think the author could have somewhat lessened her mentioning of the fact that she does not recall the events mentioned in the book; in my personal opinion, I think it detracts from the effectiveness to a certain extent.


The way that the author had chose to retell the story in the style of a medical mystery with emphases on a snowball effect and perpetual misdiagnosis; this creates a sense of depth and richness to the pre-existent story. In addition, it also creates a pleasant element of suspense that makes the book indubiously addictive and leaves the reader on the edge of their seat, surely wanting just as many answers as the characters do themselves.


There is also a bone-chilling aspect to this book and Cahalan conveys that with a gorgeous grace that is haunting and all too real, but almost as if it was surreal in a way too. Cahalan found a way to incorporate both techniques into her writing.


Additionally, Cahalan intrinsically is able to infuse this said sense of surrealism because she has to transform the seemingly fictionous story into a story that makes sense; in other words,  it is almost as if Susannah had to learn her own life story and her interpretation of what people revealed to her was magical and dark.


To help her readers to better comprehend the vast complexities of the illnesses and symptoms that had once plagued her so brutally, Susannah does a wonderful job at being able to break down convoluted medical analyses into articulate yet simplified explanations of the tumultuous antics that her body had created within itself. Yet even in its necessarily rudimentary language, readers will learn a great deal about neuroscience.
Since Susannah is telling the story based off of others’ recollections of it rather than her own, the feelings of those around her remain clear, pervasive, urgent, and ubiquitous, which is unusual for a work that is written in the first person. Brain on Fire was able to have a universal point of view, characteristic of a work that would be written in third person, while still remaining in first person. This was done subtly and perhaps unintentionally, but it added a unique and refreshing voice to literature. I would encourage other writers to dance in the footsteps of this.


One facet of this book is that it is divided up into three parts and fifty-three chapters. This divisions adds a significant amount of depth. The reason being is that it marks every stage of Susannah’s journey as important and integral as it is in general because it shows metamorphosis.


The portrayal of Susannah’s relationship between her and her boyfriend Stephen is quite extraordinary to “witness.”  The way in which Stephen transforms himself to adapt to Susannah’s situation is unfathomable because in the midst of all of this chaos came the inevitable realization that Susannah and Stephen had fallen in love with each other; it was almost as if the darkness of their lives had pulled them into bliss while they were pushed into something that would potentially make them angry – the sheer irony within this was absolutely astounding. Even through her routine cognitive and psychological absences and progressively childlike states that fully altered her once lucid and intelligent demeanor, he was still able to be fully involved in her life. The complete impossibility of any kind of romantic or sexual interaction between the two did not change his passion for her and in fact, it happened to strengthen it ultimately.
Susannah’s parents had the same mentality towards this as Stephen did – although they were concerned and bewildered beyond belief by Susannah’s progressively erratic affect, they still remained active in her existence and truly believed that “she was still in there.” At the ultimate concern for Susannah’s behavior had fully arisen, her mother had insisted with all of the adamance she had in her to have her admitted to the epilepsy unit at the New York University Langone Medical Center. As for her father, prior to the anticipation of her risk-filled brain biopsy, the typically non-religious man went to the local church and got down on his knees and prayed. Susannah’s younger brother James felt the same way as her parents did: scared but determined.


The descriptions of the doctors that had treated Susannah was utterly amazing. The vividness of the interesting nature of the copious amounts of neurological examinations that Susannah had relentlessly undergone, including cognition tests, psychiatric evaluations, electroencephalograms, uterine ultrasounds, and countless others, was particularly highlighted. Extensively entailing all that these had encompassed, Susannah tells these with a virtually non-existent sense of shame.


The amount of detail that Susannah had ultimately provided us with is quite impressive. With references from video footage, diary entries, medical notes, and more, Susannah is not only able to piece together the things that she cannot remember about the frightening ordeal, but she is also able to deliver descriptions of these ordeals very visually; the provided descriptions infused a sense of haunting imagery that seemed all too real.


The experience that she was facing was put onto paper in a way that made it tangible for readers to dive into it in an emotionally raw sense. It provokes a sense of empathy and feeling of numbness and pain. The beauty of it is ugly and the ugliness is beauty. The purity in it is impure. The natural is unnatural. The perpetual paradoxes delightfully invading this piece is gorgeous. 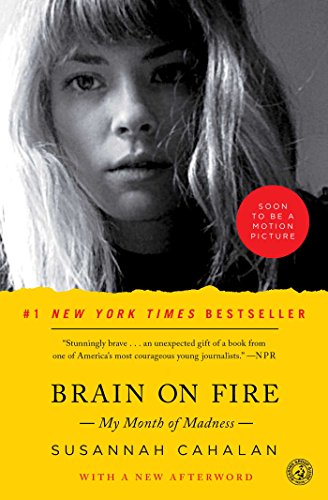