ESP, which stands for Extra Sensory Perception, but commonly known as the sixth sense.  It a since they can predict the future, from a bombing at a mall, natural disasters, and maybe even reading someone else’s mind. In the minds of the military, it is a great idea, as they put millions of dollars into the research of ESP.  From the CIA, to local universities, every scientist in the world knows about ESP, but only a few have it, and from those few who do have it, only some know how to use it.

Kass made a mistake, one so big that it got her expelled from high school, a few months shy of graduations, and got her acceptance to Columbia revoked. Making her life go from high to the bottom, all because she wanted to help people. Her father, a billionaire due to guessing the right stocks at the right time, has a plan. He sends her off to his Uncle Brian’s lab at Henley University, where Brian is allowed to accept one student each year, no questions asked, hopping Kass can be that student. There Kass learned that Brian runs an ESP lab, and that her peers from the HEAR group (Henley Engineering Anomalies Research) all have ESP, including Kass herself. From that group there is Mara, Alex, Dan, and Punkaj (pounced punk edge), and throughout the summer Brian is going to experiment on them to increase their ESP. But there is something else, as Kass explores deeper into Brian’s past, she learned more about the kids summer camp she attend at Henley when she was little called Dodona. Kass becomes close to her HEAR peers, and becomes open minded to the whole being psychic world.

Ronin Epstein took an interesting topic about ESP and turned it into a fun little book about a girl who is discovering a different side to life. The downside? It was boring. At times the plot moved so slowly it seemed as if it was going backwards and you were unlearning things you previously knew. Every character you meet seemed to have this long back story you need to know, in which they won’t tell you till later in the book, if at all. The epilogue at the end made no sense, as it leads into a second book, like to make it more cliché the author could have put “To be continued” would have made it easier to swallow. It was a good book, with a sharp twist in the middle as Kass kisses the boy she’s supposed to stay away from, the past come to haunt another, and in the group of five, one dies, and three of them unite. Camp Dodona was not meant for smart kids, or even kids with ESP, it was meant for psychopaths. 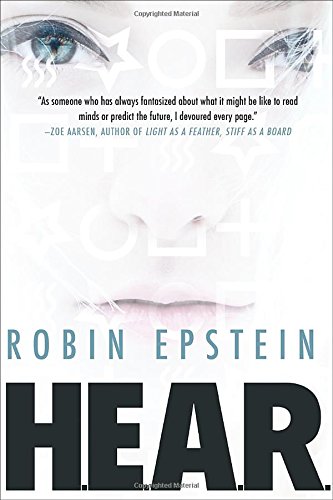