Favorite Quote:
“How vain it is to sit down to write when you have not stood up to live.”
― Henry David Thoreau

Winner of the John W. Campbell Award for Best New Writer in 2015, Wesley Chu creates a stunningly beautiful world in his novel, Time Salvager. Although he has previously released the Tao Trilogy, this was my first time reading Chu’s work. And I was blown away.

In the future, the Earth is toxic and Humans have fled to the outer solar system to survive. To delay the destruction of the species, time travel holds the key. People known as Chronman have the sole ability to use technology to travel to the past to recover resources and power the future.

The story is remarkably original in today’s world where dystopias are in the forefront of the entire genre.
Time Salvager reads like a sprawling epic science fiction film. The action was well written and the world building was thorough. Which, is why the movie rights were quickly bought and currently has Michael Bay attached as a Director.

But while it is an entertaining read, it is not perfect. The book drags in the middle a little bit. And when the action picks up at the end, it just ends. While it does not end in complete cliffhanger, the ending is a lead in to the sequel.

While I read this not knowing there will be a sequel, I am excited to pick up the next book, which is titled Time Siege. Overall, I would rate the book 4/5. It is perfect for people who wish to take the action from the Transformers films with the nuanced approach to world building of Game of Thrones and set it in space. 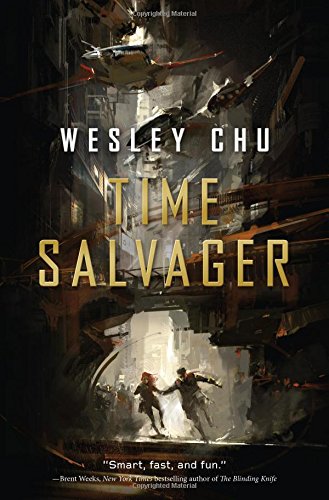