In a world where angles, demons, and Nephilim exists come to a whole unworldly problem. For two weeks during Cheshvan a fallen angel can possess a Nephilim body, one they forced to swear loyalty too. There in that body, they can feel, but not emotional anymore, but physically. That why during those two weeks they have a lot of sex. From that sex they produce more Nephilim and as a purebred one cannot die, they live on, giving off their Nephilim blood of their children. The cycles continue until a female descendent of said fallen angel is born. As according to the Book of Enoch if that female decedent is sacrifice, the fallen angel becomes human, something that means the world to them. As the fallen angels are on the hunt for their dependents, the Nephilim band together to fight back to fallen angel force, one they might win by the next Cheshvan.

Two months ago Nora was introduced to the world of angles and Nephilim when Chauncey (who went by Jules) tried to kill her to get back at Patch, a fallen angle who made him swear loyalty to. Going to present day Nora is alive and well and has been dating Patch since that night. Patch, who was a fallen angle, saved Nora’s life, and was given his wings back and became her guardian angel. Nora is excited as they have the whole summer ahead of them, with Nora and Vee having summer classes during the mornings (Nora for chemistry, Vee for Spanish) they are looking forward to beach trips and camping with Patch, and Vee’s new boyfriend who happens to be Patch’s best friend Rixon. After watching fireworks at Delphic, Patch drove her back to her house.  Even though it's only been two months, Nora loves Patch, after they traded gifts (she gave him her father’s ring, he gave her his chain given to him by the Archangels) Patch swore to her he’ll never stop loving her. It was that point Nora thought was appropriate to say “I love you” to Patch. With those three words Patch had to quickly leave after he “herd something” feeling stupid Nora goes to bed only to find out during chemistry the next morning, that Marcie, her lab partner, that Patch stood outside her bedroom window last night. Scared as Marcie is a hard girl to resist Nora feels it’s her duty to get to the bottom of this.

“Just tell me what you’re thinking!” Nora screamed at Patch during a fight. He won’t tell her why he was at Marcie’s. Patch tries to explain that the Archangels are watching him closely, that if he falls in love with her they’ll send him to hell forever. Nora is feeling like their relationship was doomed to fail, and wanted out. Even though Nora told herself it was because of Marcie, and how much Marcie liked Patch, and Patch being a typical guy couldn’t resist her, Nora knew it was because she was confused and scared of the archangels. “When I kiss my boyfriend, I want to know he feels it!” was the most hurtful thing Nora could think of to Patch. With her summer of romantic nights with Patch ruin, it seems as if he cannot get out of her life. Everywhere she went he was there, with Marcie trailing behind him. An old childhood friend Scott Parnell, moves back into town. Nora knows something is off about him, as he gives off the dangerous vibe with a supernatural twist to it. With Patch tells Nora not to get involved with her, Nora is drawn to Scott, as if she can find out what secret he is hiding.

Becca Fitzpatrick did a fantastic job with this second novel. I don’t know what draws me into this series, but it is honestly one of my favourite. Nora, where she may not be the smartest, has zero heroine traits, and has not developed as a character from the first book, seems more of a background character than anything else. If you want to see any life from her, it is during her interactions with Vee, which don’t happen that much during this novel as Vee is with Rixon, or Nora is alone with Scott or Patch. Defiantly need best friend interactions with the next two books. Patch is still the hot, mysterious boy who fell in love with plain old Nora. They say that in a relationship one must love more and in Nora and Patch case, it is definitely Patch. Nora who is either dumb or blind misses all the things Patch does and risks for her, all because he love her. He gave up the one thing he wanted more than anything in the entire world, a human body, if it meant keeping her alive. As the story gets more complicated the relationships and history between the characters grows as new one are added into the mix. It seems as if ghost from the past can affect the future, so you better run Nora before they catch you. 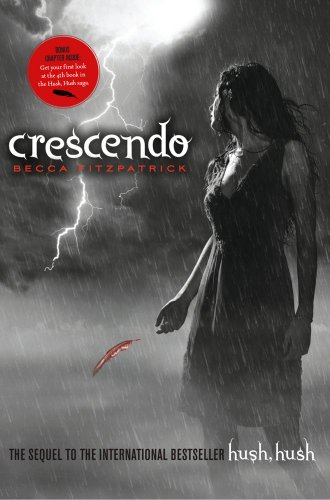