Mark Watney is the seventeenth person to set foot on Mars. But the Ares 3 mission that was supposed to last 30 days has transformed into an astronaut’s worst nightmare: trapped on Mars with no contact with NASA or Earth, Watney has to figure out how to survive four years on a planet where nothing grows. By then, the next manned mission to Mars will land, and he might be able to hitch a ride back home. Maybe. Until then, he’s on his own. Equipped only with his super-botanic-powers, engineering brilliance, and catastrophic wit, Watney will have to battle against raw Martian nature for his life.

The Martian kicks ass: the book takes off from the start and doesn’t look back. Your sleep schedule will suffer as every twist in the plot hooks you helplessly, releasing only to send you spiraling up in zero gravity. And I’ll give you this—Watney is an inevitable hero. Unbelievably cheeky, while still smart smart smart, he, like every other character in the book, feels flesh and blood and…awesome. But even with an individual genius like him, you get to wonder how on earth Watney will survive this. (Botany powers to the rescue!) From page one, it’s clear he’s in deep. Part of the excitement stems from how high the stakes are set; and this voyageur’s disaster never once feels worn out or predictable, above all with the ability to one day happen.

Also, extreme technological whiz repeatedly saves the day. “Grounded in real, present-day science from the first page to the last,” your droopy jaw will droop ever further as Weir crafts a story as seamlessly joined with action and adventure as it is with fact. For you math people, the numbers are there. And for everyone else, Weir presents the concepts in understandable English while maintaining authenticity. In fact, your jaw might even fall off when you realize Weir probably doesn’t work for NASA at all, as the autobiographical blurb on the back of the book jacket suggests. So how on earth does he know all this stuff? Is he an actual Martian?!

Finally, the modern feel of the book will last. Since the humans of 2015 have yet to land any of their own kind on Mars, it’s safe to say this book will stay a precedent in the foreseeable future. (Did I mention modern already? The character crew fulfills as multi-racial, multi-gender, and multi-religious, on Mars or on Earth. Or in space.) It’s an epic adventure for a new age of space eagerness and space tech, and a remarkable survival story with unforgettable characters all around. Here’s to the future, folks. 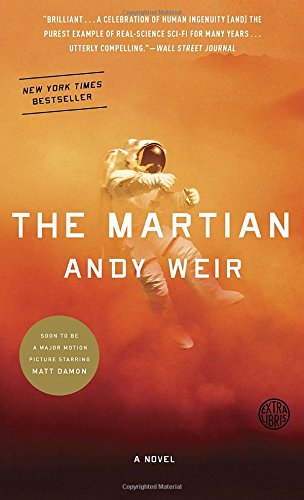