In a world where everything is controlled for you by the sorting of numbers. From who you’ll marry, the job you’ll have, they even promise you a fulfilling life all the way up to age eighty, where you pass away peacefully never feeling useless or unwanted. Your life is controlled by three tablets: green, blue and red. No one knows what the red tablet does, people believe it is a death tablet, but the Society fends off those rumors. The blue tablet is given at age 10; it is filled with enough nutrients to keep you alive for several days. The green tablet is given at age 13; it will make you calm, but you can only use it once a week. The red tablet is given at age 16, and is only to be used when instructed. Where the world is finally at a state of content, the Society seems perfect on the outside. But inside at Mapletree Borough, one girl finds the flaw that runs deep into the bones of the way of life.

Cassia follows the rules. She always had, and thought she always would. Her family consists of her mother, father and little brother Bram, who have lived in Mapletree Borough all their life. Everything was peaceful, or so they thought. The day of the Match Banquet was a series of preparation for the girls of Mapletree. As at age seventeen the girls will find out which boy they have been destined to marry, and a chance to show off their beauty by wearing colorful dresses, instead of their regular brown, black or gray clothes. Cassia was especially excited as this was the day she’s been dreaming of, showing up as the only girl in a bright green dress. Her match, well it was an unusual one as she was matched with her best friend since childhood Xander. It seems like a fairy tale as both families were excited, Cassia’s peers were jealous as Xander was a good cached, and with their memories of playing in the sandbox together, they were a perfect match.Cassia was happy, at least until she put her card in to find out all about Xander’s life and saw a face that wasn’t Xander’s staring back at her, instead it was a different boy, one she knew, but never got to know well. His name was Ky.

Ky Markham was Cassia’s second matched. This has to be a mistake as you cannot be with two people, yet the Society doesn’t make mistakes. It hurt Cassia even more as she knew Ky, they went to school together, and have hung out a few times. Where Cassia was perfectly happy to be with Xander, she couldn’t help wonder why she and Ky were matched up, even if it was a mistake. For her summer activity she picked hiking, and was shocked when Ky was there too, and the Offical had paired them up. For many trips with Ky up The Hill, Cassia starts to learn about his story, about the story of the Society, and how even though they told her to be with Xander, she wanted to be with Xander, she couldn’t help but fall in love with Ky. With a love triangle forming it is up to the Society to cut this tree down, before it can start causing real trouble.

Ally Condie had a good story line going, yet the characters fell flat. The Society (similar to the one in The Giver) had a good backbone, with a little mention of how our society fell; they had rules, normal and weird (no running outside of the track), and a general order to keep the people controlled. Yet I felt nothing for Cassia. Maybe it was the fact that the story was a love triangle, but the love Cassia has supposedly fallen for Ky and Xander never felt strong, let alone reality. It was a good start, but to keep this story going there needs to be a strong character development event coming. 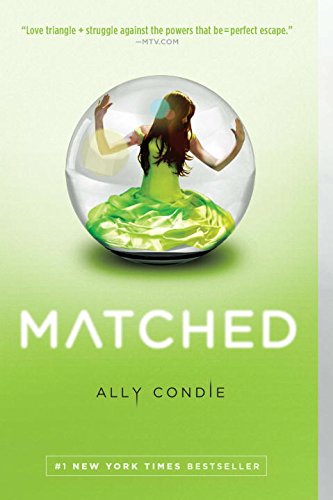 Rosehawk BRONZE said...
on Oct. 3 2015 at 9:37 am
Rosehawk BRONZE, Fife Lake, Michigan
4 articles 5 photos 8 comments
View profile
I agree. I tried to read Matched, but something about it made me not care that much how it ended.