The Upper East Side of New York is where all the fun happens. From gossip about each other, to the cut throat competitions they do, and finally their university examinations. Where the Ivy League colleges’ only want the best, they are sadly forced into taking not just the best, but also the rich and who parents’ will donate more money if you let their child in. That’s the fun part of being wealthy! The downside is everyone expects you to make it, without even breaking a sweat.

Blair Waldorf knows she will get into Yale. She had dreamed about it ever since her father (who went to Yale himself) took her into one of their football games.  Since then her life plan was to get into Yale, get Nate into Yale, graduate together, then get married, have kids, and grow old together, but still in love. Blair with her top AP classes knew she could get into Yale, but what about Nate? His stoner phrase has lasted far too long, and now he is more interested in taking a year off to go sailing, then attending university with her. When their interview times came up Blair was shocked to see that she was the only one going to Yale, where Nate, Dan and Serena all had interviews at Brown, on Saturday, at the same time. Coincidence? I think not. With Nate promising to stay away from Serena, he happens to meet a big breast freshman and has taken a liking to her. With all this drama swirling around, Dan has finally taken the hint that Serena doesn’t like him like that, and that his poems and moodiness were freaking her out. With all this going on Gossip Girl is in the centre of it keeping everyone updated on her blog.

Cecily von Ziegesar did a much better job in this book than the first. She dove deeper into the characters, expressing more about their goals of the future, and what they are currently afraid of.  She made Dan into a moody loser, Nate a stoner with good looks, Jenny a flirty freshman, and Blair the extreme queen bee.  Half their problem in the book is avoiding each other, and keeping secrets. If instead of hiding in that said person, you go up and talk to them, half these “plot issues” wouldn’t exist. For a teenage girl book, it is quite good, but it’s one of those “air head” ones where it’s fun to read, but you don’t care what is happing to the characters in it. 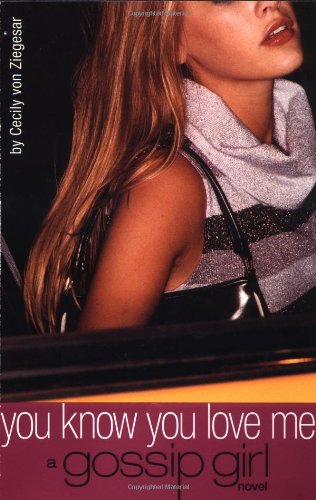 What elce could go wrong?