In the world of comic books and movies, anyone can be spooked by the supernatural world. Vampires, werewolves, even zombies exists in any type of form of literature. This book, given away by the title, is about zombies. Now zombies we know are slow, stupid, looks like a rotting corpse, and their goal is walking around trying to eat people’s brains. Not something you would ever want to see. The only definition of a zombie is that they are undead, nothing says anything about their beauty.

Hannah and her father move around a lot. Never paying last rent, moving in the middle of the night, running away from their problems. Hannah’s father was a cop, but after he did “something” he was fired, and now ever cop Hannah sees makes some snide remark of her father. Moving to their new town, Maple crest, Hannah feels something off. The town was dead, with lots of houses for sale, other’s boarded up. Unable to convince her dad to leave right away, Hannah ended up going to school. There she met the people who run the town, the cheerleaders. The claim the halls with their blonde hair and pale perfect faces. Hannah knew from the moment she saw them, that she would do anything to be like them. Her friend though, the first guy who notices her, told her to stay away. Lukas was his name, as he swore up and down that they were zombies, showing Hannah pictures from comic books, saying they feed on the living to maintain their beauty. Hannah doesn't give in to Lukas’s theory, tried her hardest to be the newest member of the squad, even if that meant giving up herself.

I tried not to read horror novels, especially zombies, but Brian James did a good job on this one.  He turned zombies into the “It Girls” making them skinny, pretty blonde, and names all beginning with the letter M. It is no wonder why everyone at the school admire them. Hannah was a clear headed girl, who desperately wanted to fit in. She reason with herself wisely, and told herself that Lukas was crazy. The part I did not like was hoe slowly it picked up. It took forever for Hannah to realize they were zombies. With her taking too long I felt the ending was rushed, as I fully could not grasp what was happening. To top it all up the ending sucked. Majorly bad job, and it just ruins what happen during the climax. The last two chapters of the book was horrible, leaving a bad taste in your mouth when you finish it. The book is a novel, though, which I am very pleased about, as there is no unnecessary prequel to follow this okay book. 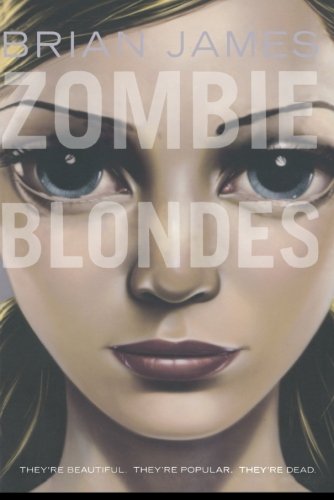 Not one for horror, but this one will do!