The seven demigods have been through a lot. They manage to complete their individual quests (book one and two) find each other (still book two), Annabeth defeats the spider and save the Athena Parthenos (book three), and her and Percy going through Tartarus (book four) to get where they are today. Today they are a week out from August first, the day that Gaea wakes, also the day the Romans plan on destroying Camp Half-Blood. With little time Leo, Piper, Jason, Percy, Annabeth, Frank, Hazel, Nico and Reyna have to make a plan in order to save their camp and their world from Mother Earth herself.

Each chapter takes place from a characters point-or-view while constantly switching between characters. With the Athena Parthenos will go west; the Argo II will go east, the book was divided between Nico and Reyna story, and the seven demigods story. Nico and Reyna along with Coach Hedge were assigned the task of bringing the Athena Parthenos back to Camp Half-Blood. This became a daunting task as they used Nico’s shadow travel to move great distances. This method had taken a toll on Nico’s health as if he did it much more he would become a shadow himself.  Nico kept that information to himself and push himself to the limits, for war in the camps would not stop unless Reyna deliver the statue on August first, otherwise Leo, Percy, Annabeth, and Piper would not have a home to return to.

The second half was aboard the Argo II as it sailed east for Athens, Greece. Taken from the point of view of Leo, Piper and Jason, them and the other four demigods travel to stop the waking of Gaea. They go on team quests, take down Goddesses and Gods, convince others to help them out, all the save the world as we know it. Yet when it comes down to it, there are secrets and undergoing lies that the seven are keeping from each other. Most sadly, are happening to our one bachelor Leo. He doesn’t get the softness of Frank, or heroism that powers Jason and Percy. Nor is he “one of the girls”, he’s just Leo; the jokester, sarcastic boy who loves to build things.  His love for Calypso is real, and he is determined to fulfill his promise to her.  The hero’s go through dark times together, yet one thing is certain: No winning comes without lost, no hero lives without sacrifice.

Rick Riordan is an amazing author. He turns stories and myths from ancient times to modern day society for kids. Every story he wrote had the fantasy and mystery that everybody loves, yet truths and facts hidden in it as well. I am proud to say that this being the last in the Heroes of Olympus it was a great. With amazing, captivating writing this book will fly through your hands, even though it is over five hundred pages. As the last it wrapped up all loose ends and even left room for you to image what happens next.  One part of this book was strange about how he limited the point of view of the charters. In this only Nico, Reyna, Jason, Piper and Leo had the story told through captures. This made me sad since I never got to see the story trough Percy and Annabeth, our two oldest demigods. I am pleased to say I love this book wholeheartedly, and like the other fans of Rick Riordan I hope this is not the last we see of our heroes.

“Seven half-bloods shall answer the call,
To storm or fire, the world must fall,
An oath to keep with a final breath,
And foes bear arms to the Doors of Death” 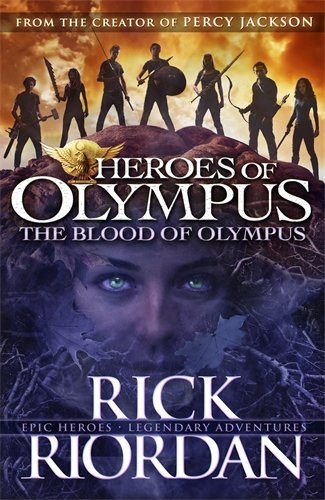 In love with this ending!

View profile
Ughh I cried so much in this book! Loved it!