Katarina Bishop’s family is involved with an old type of business. The arts of stealing. Paintings, statures, and works of art that are priceless, the Bishop family have done it all. Kat and her team of teenage thrives have been raised in the culture of their family. Kat’s first heist was when she was little with her mother and father. It is rare when they let an outsider in, yet it happens as one day Kat lead Hale into her life and her family’s business. Kat knew that she and Hale’s family are different, yet she did not know how much until they were together neck and neck.

Hale never looked back on his family the day he left with Kat. But as W.W. Hale the fifth, he was a Hale and was expected to attend Hale family gatherings. One of those turned out to be his beloved grandmother’s funeral.  Hale was the closest to his grandmother and in turn was the heir to her billion-dollar company.  Pulled from the dark to the head of his family Hale realizes there is no room for Kat and their heist in his new role. Kat who loves Hale more than she let on will not let him go that easily. After getting a tip Kat learns that they will of Hale’s grandmother was not the real one, if was off to rob the Henley (again) to steal the will form his grandmother’s desk. The one mistake Kat made was not letting Hale into the loop of their heist. Kat and Hale have to trust each other, and trust their family in order to pull off the biggest heist of all time. In that trust will their relationship hold, or fall apart in the process.

Ally Carter is an amazing writer. She captures the emotion and teenage drama and twist into a fantasy world where teenagers do amazing and illegal things without being caught. In this Ally really experience the relationship and differences between Kat and Hale. How they are nothing alike, but how their friendship and new found love has always been strong. We got a look into Hale’s life and his family of how they are not so perfect, and more of a gang than love. They turn on each other faster than they would strangers. Kat’s family played a bigger role in this book as well, with her entire family coming together showing their love and support of Kat though out the big heists. There is a fourth book coming which I am very excited to read and find out more about Kat and her family, and what heists will her group be able to pull of next. 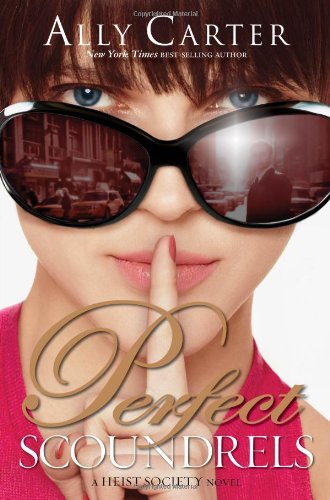