The Young Elites by Marie Lu

The plague has finally stuck. The blood fever, as it was called infected the nations. Sweeping through the streets infecting the poor, the rich, even the royalty. The fever victims perished, while many of the children who survived were left with strange markings. From changing color of hair and eyes, to strange tattoos sprawled on their body. The ones that were left marked were called malfetto, as they set shame to their family. Some malfetto grew gifts and were cast out as demon children. They grew into a society called the Yong Elites, whose main job was to defy the government and rescue other Elites whom the government planned to kill.

Adelina Amouteru is a survivor of the blood fever. She survived, but not without a price. She was turned into malfetto, turning her dark hair white, her lashes pale, and her left eye was nothing but a scar. To her father’s dismay she was not a Young Elite, with no powers to go with her markings. Instead Adelina was just another malfetto, setting shame to her entire family. Not everyone was affected by the blood fever and turned into a malfetto. Where Adelina lost her mother, her sister went through it unscratched. With her father always loving her sister more, and Adelina not an Elite, his punishment and words become harsher, hitting her, trying to provoke her powers to come. None of his attempts worked. It was the day that Adelina’s father sold her that she made her escape. Only to make it into town for her father to catch her and drag her back home. That raining night was when Adelina first released her powers. To kill her father. Obviously you cannot kill someone center square at night, so it was off to her hanging with Adelina for murder. It was no the stand that the Young Elites swept in the take Adelina away. Off into their society of killing, thief, and doing to world right for malfetto. It was there that Adelina got to show her true self, and got to make the world cower at her feet.

Marie Lu is an amazing dystopia writer starting off with her best known trilogy the Legend series. In this series, she has created a new world and a new plague. Our new girl is totally different that June as Adelina Amouteru is motivated by passion, hatred, and fear. Her powers are built over the fear that her father has caused her. Over her hatred over the other Elites, and the government. The strongest of all is her passion of love and to be good, overrides her fuel of hatred making her an unstable time bomb. I enjoyed this book, but not as much as I did the first Legend one. Marie Lu is still a fantastic author, and I am very excited to see what Adelina will do next. 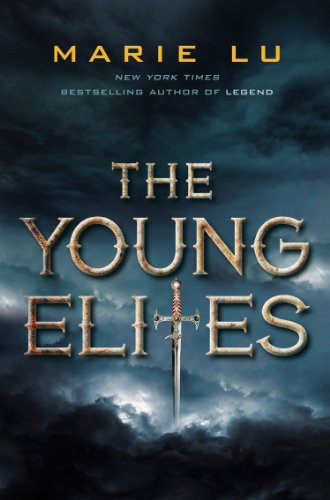 different worlds,  but the same segregation.