War is upon them. Day and June have chosen their side, as they decided to stand behind their young Elector Primo. Picking the Republic, over what they have done to them really changed Day and June.  Yet they rather fight for their messed up Republic world, than turn over into the slaves of the Colonies. Their relationship is also wreaked as the second book ended with Day leave June as his dying gift to her. Yet those two are in too tight to get out, as this new book brings even more misfortunes to them.

Day`s life is at a rocky middle. Yes he is dying, yes there is no cure, and yes it gets headaches so bad he passes out.  But on the bright side he finally has his little brother Eden back. His whole family has finally been brought back together. There is only three holes left in his life. One is for his dead family; the other is for Tess for he has no idea where she is. The final is the one left by June. Even though he is bad for her, after all does he not have only months left to live? Yet no matter all the cons and reasons why they should not be together, Day has fallen head over heels for June, and not amount of time or distance can change that. Yet can he tell her one more time how much he loves her, or is it too late?

June misses Day.  She had no idea why he left, simply that he is gone, and never to be heard from again. Yet June accepting the role of one of three Princeps-Elect, and her job is filled by looking after the Elector Primo Anden.  Yet when Anden want to take their relationship into the “more-than-friends” zone, June gets distant. And when Day comes back into her life, by her leaving a trap, her heart goes into knots. Even though she knows she loves him, she is the whole reason why it is only him and Eden left. Yet she truly does love him. In this book June has to learn how to tell people what she wants, and where she truly belongs, and who has her heart, and she has to let him know soon.

Marie Lu did an incredible job in the whole series! Hunger-what? I do not even care about Divergent; it is the Legend series people should be talking about! This book talks about the near future with the twist in society that are staring the best-seller shelves. I loved this series for many reasons, how each book she writes Day’s part in a different color. From gold, to blue, and ending in red, symbolism they spray painted pictures on the cover. Even how she spent the whole series switching from June’s and Day’s point of view. We got to see how they had mental battles and hiding the ugly truth from each other.  The ending of this book (and the series) was killer. I was so shock and could not even handle it, it was so dramatic.  Yet it was fitting, and some might call it a clean shot, but it was worth it. Now I can imagine June and Day, how in the end they will finally be happy, and fall for each other all over again. 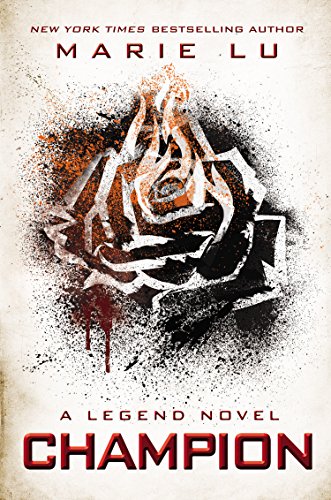