City of Bones (The Mortal Instruments #1) by Cassandra Clare

The world is a strange place. Full of secrets, mysterious, past, and some unbelievable events. Yet we all believe that no matter what happens, there is only one type of life on earth, and that every human has the same basic mindset. That’s what Clary though too, until one faithful evening at the Pandemonium Club, that change her life entirely.

The Pandemonium Club, is like every other club in New York City, except this one allows for minors to join. That what fifteen-year-old Clary Fray was doing at that club that night. She and her best friend since forever Simon, were out to have fun and to do some dancing. Yet when Clary sees a blue hairy boy murdered by three teens with strange tattoos, the night does a quick 360 on her. Where Simon was no help to her, for apparently he couldn't see the three teenager murderers, Clary looked for the blue hair boy’s body, only to find a pile of dust instead. Panicking Clary dragged Simon home, hoping to never see the strange teenagers again. Yet the next day, one of them returns to speak with Clary, his name was Jace and he is a Shadowhunter. Shadowhunters are warriors dedicated to killing demons and protect the humans.  Jace who looks like an angle, yet acts like a jerk, drags Clary into his world, one that Clary was not ready to enter. With her mother’s disappearance, Clary being attacked by a demon, and her mother’s best friend Luke tells Clary he doesn’t care about her mother, Clary gets lost in this new world.  It’s up to Jace and his team of Alec and Isabelle to help Clary, who is new to their world. But why is their world so interested in Clary, who is just a mundanes (an ordinary human). And why now is Clary gets "the Sight"? Soon Clary will learn the truth about her roots, a truth her mother was trying to hide from.

Cassandra Clare did a wonderful job in this first book of six. Where it is an extremely long book, with many long chapter that nothing happens. There are only a few books worth going over 450 pages, this is not one of those. You could only read every other chapter and only miss one little event or discovery. The epilogue (which I do not understand since there are more books, why not just turn it into a chapter) itself is around forty pages. Leaving you the choice of sitting there for another hour and finish the book, or leaving it and finish the book later.  Where Clary acts like a normal 15 year old who’s panicking over all she just learn, her relationship with Jace is strange. I couldn't get a feeling form Jace, weather or not he loved, or hated Clary, he seems to not be able to express himself. The ending of the book is a total twist that I was not expecting at all. One that puts Clary and Jace in a very awkward situation. This book hit the movies in 2013 with Lily Collins playing Clary. Although the movie was a flop, the books weren't,  as the City of Bones is a New York Times Bestseller. Whether or not you liked this book, I encourage you to keep reading since I believe things are about to heat up in the Shadowhunter’s world. 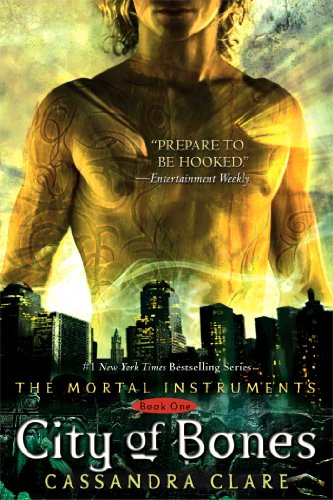 What a fantastic start to a series!

View profile
I love love love this book! Jace Wayland is one of my fav book chars ores of all time!