Favorite Quote:
Be strong, believe in freedom and in God, love yourself, understand your sexuality, have a sense of humor, don’t judge people by their religion, color or sexual habits, love life and your family. -Madonna

The book “Openly Straight” by Bill Konigsberg is horrible. The protagonist Rafe Goldberg is a gay junior who travels away from his hometown to an all boy's boarding school in Massachusetts. Why? No. Good. Reason. He feels labeled in his home town. His liberal, accepting, supportive town.

I myself am a gay high school junior. That's what made Rafe so hard to relate too. He is nothing like any gay boy I have ever met. He doesn't seem to understand just how great his life is. He feels “labeled” and “pigeonholed”. That is no one's fault but his own.

Is his life labeled because he's gay: of course it is. As it very well should be. Sexuality is a major point of who you are. Yet for Rafe a character supposed to be so comfortable in his own skin, he can't accept himself. He is the only one labeling himself. Sure, he mentions snide comments from people on his soccer team. That's life. Snide comments are literally the worst thing he experiences. So he moves halfway across the country and goes back into the closet.

Let me put this in context for you. I was given death threats (I wish I could put all the fags in the world onto one island and nuke it) and told to kill myself (Hey, faggot go hang yourself tonight). What did the teachers of these classes do when I told them? Nothing. My Spanish teacher was the only one who tried to do anything. The Principal ignored the problem. The Assistant Principal let them off with warning, because I had defended myself for insulting them back. Never mind encouraging suicide is a felony in many states.

My friend Ryan was forced off his soccer team (Wait, doesn't Rafe play on a soccer team?). The reason? Endless tormenting, hateful glares, and bigoted children, coaches, and parents. But, oh my God, Rafe was given snide comments. It pales in comparison. Mark was physically beat up in middle school. Rafe came out with no problems in eighth grade. Sean's father cut him completely out of his life, going as far to divorce his wife because she still loved there son. Sean was twelve. Rafe has fully supportive parents. Rafe overcomes none of these issues to go on and achieve a better life.

No, Rafe runs away from his near perfect life. A life many gay teens will NEVER experience. All too only go into the closet again. Then the big issue of the book: he develops a crush on a straight boy. Hasn't every gay boy been there before? The answer is yes. It hardly deserves a book dedicated to it, especially when the main character has an idealistic life.

To close my little rant up, this book was given to me by my Mother to help me get more guy friends. The thing is, my sexuality doesn't define me. It is a part of me. It defines me to some, close minded people. I have straight guy friends who see past the fact that I'm gay. The only one preventing Rafe from living the life he wants to, is ultimately himself. All because he defines himself entirely by his sexuality. 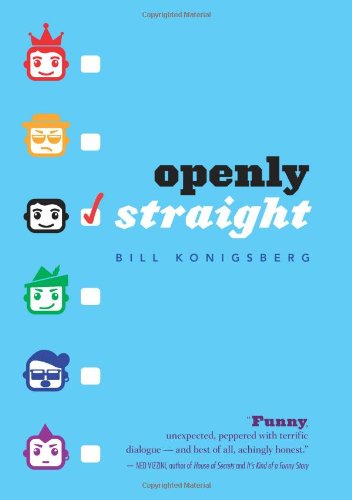 Favorite Quote:
Be strong, believe in freedom and in God, love yourself, understand your sexuality, have a sense of humor, don’t judge people by their religion, color or sexual habits, love life and your family. -Madonna

View profile
Good thing I read this review before I read this book. (Though there is a part of me that says I should just read it to read it.) Congrats on the Editors' Choice. Personally, I would be careful with rants on a review. But I see how every of your points made sense. Not only made sense but are true. And I love how you said at the end that you don't being gay define you but rather it's a part of you, it IS you. But on to the review, it was a little too ranty. Nonetheless, I agree with what you said.