The Queen is dead. The murder is in prison. The funeral is being planned. It seems as if this book will be short for Rose, as she will be executed for murdering the queen in the first few chapters. A true traitor’s end for our heroine. Yet all is not lost for our heroine, as she will sacrifice everything for the ones she loves.

Jail cells do not fit Rose. Nothing to do in the tiny space. Her only freedom is escaping into Lissa’s mind, but even that is not enough. Rose wants out. Out and to be free of all this drama. With the help of all her friends, they manage to free Rose and send her off to safety with Dimitri and Sydney. But Rose does not want to wait in a small town and watch things blow over. Rose tells Dimitri and Sydney about the note the Queen wrote to her about the last Dragomir. Together they set out to find the boy or girl in hopes to be able to find him/her before it is too late.

Vasilisa Sabina Rhea Dragomir goes by the name Lissa. She is the main moroi in the series. Captivating and angle-like Lissa have been there for Rose since kindergarten. Lissa is also the last known Dragomir after her parents and older brother was killed in a car accident. Rose was killed too, but using her power of spirits she brought Rose back to life, making her shadow-kiss to her. This was the birth to their bond. She helped plan Rose’s escape then claimed to know nothing about it. With Rose in safety Lissa does something truly remarkable in hope to give arose more time. She runs for Queen. With three tests, she has to past before the voting, Lissa realizes that she may have a chance.

Eddison Castile goes by the name Eddie. He was a close friend of Mason and a friend of Rose. In Spirit Bound he helps Lissa and Rose break out Victor Dashkov from prison. In this book he helps Lissa to break out Rose. With Rose gone, he guards Lissa from all danger, even if that means killing a moroi.

Christian Ozera is a royal moroi who because of his parents does not get treated with respect. Life has changed for Christian a lot after falling in love with Lissa. Even though they fight a lot and broke up over Avery, they got back together for Lissa is “The One”. He is part of the team that helps Rose to escape. He then helps Lissa in her role to run for Queen. He like his aunt is a moroi who wants to fight. I felt bad for him the way the book ended. He gained so much, yet lost more too. He gained the titled ‘Lord’ and the best guardian. In return, he lost his family.

Adrian Ivashkov was the favorite great-nephew of Queen Tatiana. When she died it tore him apart, even more when his girlfriend was accused of the murder. His love for Rose is unconditional. He gave her his money to leave the Academy to kill Dimitri, in hopes that she will give in a chance in her return. When she did they start dating under the unapproved eye of the moroi society. He helped Rose escape and try to keep consent check-ins as he can walk into her dreams. He worries about Rose as she is off with Dimitri somewhere, as he should be! I am sorry to say that Adrian was my favorite, but he does not get a happy ending.

Dimitri Belikov is known for being a god, for he is the best Dhampir out there. This was why it was such a lost when he got turned into a strigoi in Shadow Kiss. With Rose determination and Lissa’s use of spirits they manage to bring Dimitri back from the dead. Back alive, he has sworn to help Lissa no matter what and completely throws off Rose as he could never love anyone anymore. In this book he spends so much time with her that he falls under the old intoxicating spell. He learns how to embrace his feelings and learn how to value his second chance at life.
Rosemarie Hathaway (goes by Rose) was the main character in this series. She grew into the beautiful person she is now because of her friends. She manages to patch up her relationship with her mom, and connected with her moroi Dad. Her life has been a series of heartbreaks and joy as she became the youngest Dhampir to kill so many strigoi. Yet with this final chapter Rose has to experience the toughest challenge yet. She told herself that she was over Dimirti and moved on with Adrian. Yet spending her break away as a fugitive with Dimirti, she realizes that their love for each other could never be completely destroyed. Facing her love challenge and finding the last Dragomir, Rose’s life is put on the line several times. Yet Rose is brave, and manages to walk into any situation with her head held high. She got what she deserves in the end, letting her finally have her happy ending.

Richelle Mead has finally finished her bestselling series with a bang. This is truly one amazing series definitely one all teenage girl she read! The ending of it was remarkable giving everyone a complete end. Although I was very sad for Adrian, I felt that Rose can live the rest of her life in peace. This book is stocked full of twists, turns and emotions. The end is in sight as Rose and Lissa has to sacrifice anything and everything hope to make things right. Yet nagging feelings happen as they realize what if true freedom means sacrificing the most import thing of all?

“You said you were a victim. That's why… that's why ultimately, you and I aren't matched for each other. In spite of everything that's happened, I've never thought of myself that way. Being a victim means being powerless. That you won't take action. Always… always I've done something to fight for myself… for others. No matter what.” – Rose 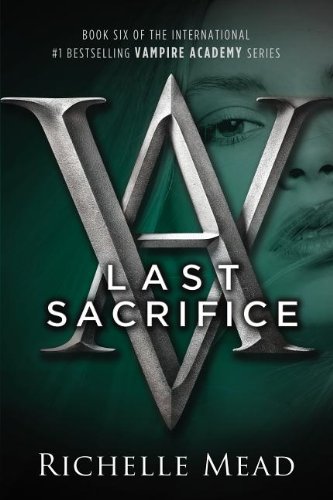 
Buy from Amazon
The author's comments:
A beautiful ending for such a tragic series. i am very pleased how Richelle Mead ended the series and that Roes does get a happily ever after.
Post a comment
Submit your own