Dimitri gave Rose a choice. Become a Strigoi and live with him forever, or die. Rose is needed to get back to her old life with Lissa, (who was dealing with Avery user who wanted to make Lissa Shadow-kissed to her) so after a battle on the bridge she staked Dimitri and pushed him over. Unlucky for her, she did not push hard enough as Dimitri survived and is on the hunt for her. With his weekly updates sent by mail to her Rose known that leaving the safety of the school is not an option.

Yet happiness is still in Rose life. As she agreed to go out with Adrian, who is quite the catch. And above all she has finally graduated. Getting her promise mark on the back of her neck, she and her classmates are finally guardians. No longer connected to the school, Adrian, Lissa, Rose and the rest of her guardian classmates fly over to spend the summer in court.

Court lost its appeal to Rose long ago, so she expected this visit to end like the last. Yet Adrian surprises her with an invite to his parents’ house for dinner. The dinner full of tense conversation was broken when a royal visit from Queen Tatiana Ivashkov. Who was… nice to Rose. More nice and friendly to her than ever. The Rose and Adrian’s relationship moves forward, yet Rose keeps holding back for she knows Dimitri is out there and she might be able to save him.

Yes a dear reader Rose is still obsessed with the fairy tale of truing a Strigoi back to Dhampir. The only person who knows about this is Robert Doru, who whereabouts is only known by Victor Dashkov. Freeing Victor is not a big wish on Rose and Lissa’s list, but he’s the only person who can lead them to Robert.
Yet why would they free Victor? He betrayed Lissa by using her as a personal healer, and it was they who locked him up. Yet the only way he will tell them where Robert is if they free him. But how? Will Lissa even risk this suicide mission to follow an urban legend saying that you can turn a Strigoi back to whom they were before? This mission defiantly relays on how much Lissa loves Rose.

Richelle Mead had made Rose’s life hell and finally it seems that she is at the breaking point. Neither Rose nor Lissa is happy, both are dealing with boy problems, court life, and fitting into the life they were born too. The wiring is fanatic and is winding up for the big battle as it is book 5 of 6 in the series. With a shock twist in the end of the book it goes against the saying; all are innocent until proven guilty. 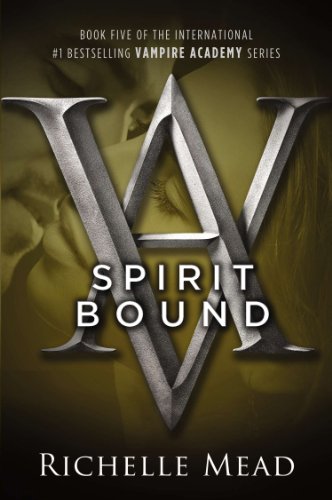 
Buy from Amazon
The author's comments:
I cannot believe this series is almost over! Oh Rose what are you going to do?
Post a comment
Submit your own