Everyone, at some point or another, senses the burning desire of wanting to matter. To make a difference in the world. To make a change. After all, Colin Singleton, the main character in An Abundance of Katherines, questions: “What is the point of being alive if you don't at least try to do something remarkable?”
This quote becomes Colin’s ultimate quest: to no longer exist as a simple prodigy, but a genius. To no longer be a re-typer of past stories, but an actual writer of the present. His most anticipated wish is to obtain a “Eureka Moment,” one that will change him forever.
But there are a few problems. Colin has only ever dated girls by the name of Katherine, and recently, Katherine the 19th, whom he has loved greatly, reluctantly broke up with him. At the beginning of the book, Colin is devastated; heart broken and ambition shattered, he claims he will never matter. He says he will never be a genius; just a prodigy with an uncanny fetish for girls named Katherine and anagrammed words. But, when Colin’s best friend Hassan invites him on a road trip to help clear his mind of Katherines and the complications of Mattering, Colin is in for a trek of a lifetime.
An Abundance of Katherines by John Green is a hilarious, enlightening novel about unearthing and accepting who you truly are. The characters are poignant and interesting, especially Colin; his mind is so unique, filled with fascinating facts, equations, and words. It was a joy for me to experience life with him, because of his diverse thoughts and relatable personality. Hassan, Colin’s friend, is a hysterical character whose jokes can seriously make you laugh out loud while reading. In addition, Lindsey, a girl whom the boys meet in Tennessee, is interesting to follow, since her personality completely transforms throughout the novel. All in all, Green’s witty, clever writing is ever present in this book, and it shows throughout his characters.
I simply could not put the book down; I finished it in one sitting, due to the plot’s spontaneous, never-know-what-you’re-gonna-encounter-next events. I will admit, the ending itself is rather predictable, but in a bittersweet way; it didn’t disappoint or leave me hanging with various questions still unanswered.
After reading An Abundance of Katherines, my perspective of the world around me changed. It proved to me that the future really is unpredictable; there’s no use worrying about it and the things that follow. We should embrace whatever obstacles we come across with open arms. In order to matter, we don’t have to acquire fame or fortune; as long as we treasure the ones who matter to us, we are more important than any accomplishment could ever make us. Green declares, “It was one of those moments Colin knew he'd remember and look back on, one of those moments that he'd try to capture in the stories he told. Nothing was happening, really, but the moment was thick with mattering.” And I’ve realized it’s instances like this that keep us alive, and that keep us “mattering.”
I thoroughly enjoyed An Abundance of Katherines, and I believe John Green has written yet another astounding book. I recommend this to every Green fan, and especially to those who have not yet given him the chance. 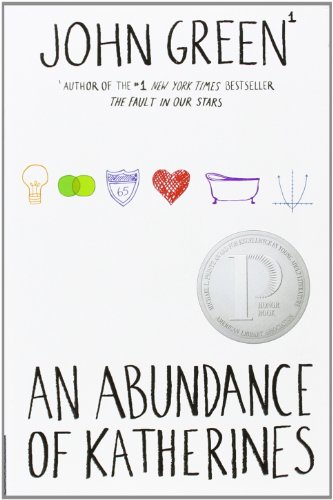