Vampires. Deadly, blood-sucking monsters. They kill and cannot be killed. Yet what if they needed protection? In this vampires are known as Morio a mortal vampire with an unbreakable bond to the earth’s magic. Dhampir are the Morio’s protection from the Strigio a used to be Morio but now an immortal Strigio out to feast on Morios.

This is how Lissa Dragomir and Rose Hathaway story comes into play. Lissa is a Morio princess and Rose is her Dhampir protection. They live and go to St. Vladimir an academy for the Morio to learn how to use their magic, and the dhampir to learn how to protect them. Yet Rose and Lissa share a special bond that no one has heard of in forever. Rose can feel Lissa’s feelings as if they were her own. This special bond formed right after the accident. Because of that accident and other things Rose broke most of the school’s rules by taking Lissa out.

After two years of illicit freedom they get caught and dragged back to the academy. The academy filled with royals, classes and more drama Rose and Lissa have to readjusts to their new old life and learns the ways of the Academy again. Yet there is new trouble unfolding for Rose with her not right love life; and Lissa’s magic. Morios specializes in magic by the four elements: fire, wind, water and earth. Yet Lissa has not specialized yet. There are a few rare who never specialize, but maintain a low hold on all four. Could Lissa do that?

Richelle Mead writing is magical. It pulls you in and never let you out. The book is feature around Rose, but always gives you a glimpse of Lissa’s life. The first book in a series of six follow Rose’s adventure as she protects Lissa from the unknown. This book is also being made into a movie releasing in theaters in February of 2014. This unlike twilight and Dracula will give you a whole new view on vampires. 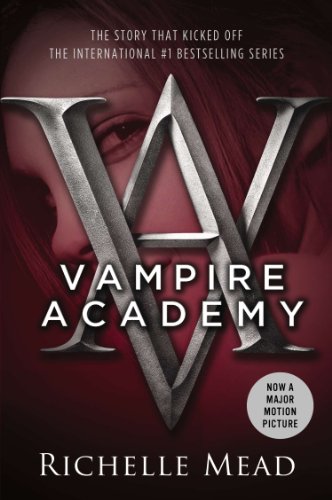 
Buy from Amazon
The author's comments:
I loved this book. Top 10 for sure!
Post a comment
Submit your own