The monster gnaws and gnashes its teeth. Begging, demanding, screaming for her. She knows with it by her side, she will die. It will be the death of her.
And yet, she still invites its talons to scrape closer, allows it to graze her cheek with a certain hunger.
She wants it. And it wants her.
The monster is metaphorically represented as meth, also known as crank: a highly addictive and damaging drug. Once it finds you within its grasp, it will never let you go.
Kristina’s story is just one example of the undeniable fate offered by the beast.
This series, consisting of Crank, Glass, and most recently Fallout, is ironically addicting.
Two books in the series, Crank and Glass, are solely focused on Kristina’s adolescent life. She was a junior in high school; a seventeen year old girl who was a high ranking gifted student and responsible daughter. She lived a routinely life, living with her mother, stepfather, sister and brother in Reno, Nevada. She was brilliant. She was trustworthy. She was dependable.
Key word: Was.
The moment Kristina stepped foot in Albuquerque to visit her real father, she began to change. Drastically. She met Adam, a good looking guy with a lust for the monster, along with a desire for short-term summer love. She met her true father, whom she realized was also a victim of the beast and late night, peaked highs.
She was offered just a taste of it. A taste of its fiery tongue, scorching yet irresistible.
And then she began to plummet mentally. Sleep became a rare gift. Thinking transformed into arduous work, and the highs never stopped. Adam was constantly there to give her more, more, more. She could not have enough.
But when it was time to leave Albuquerque for home, Kristina was afraid. Who would help her satisfy her craving for the monster while living her once innocent life back at Reno? Who would satisfy her broken heart away from Adam, her first love?
Who? Who?
Throughout the Crank series, Kristina discovers sources she’d never thought about before. Her life becomes a whirlwind of loss, of choices, and desperation. She finds herself clawing to get her hands on the monster, her body pounding for its intimacy.
But she soon learns that everything must come with consequence.
Ellen Hopkins creates a heart pounding, captivating, and beautiful story through an epic collection of free verse poetry. Her unique style draws readers in professionally and takes them on a thrilling ride, using poetic devices and diverse stanzas. Personally, this creates an even better reading atmosphere than prose; poetry is wonderful in itself, but when transformed into a captivating story, I wasn’t able to put any of the books down. Hopkins writes brilliantly. Elegantly. Hauntingly. Every delicate turn of a page results in suspenseful love affairs and close-to-getting-caught events.
However, at the same time, the plot of the series is somewhat unrealistic. Kristina’s mother, along with several adults, does not do anything to protect her daughter from drugs and does not have any restraint on her whatsoever as a parent of a seventeen year old. By the third book Fallout, Kristina has conceived at least five children with multiple men as she continues her drugged state, eventually becoming a drug dealer herself. The concept does seem a bit far-fetched. In addition, I find it quite unnerving how Kristina, after giving birth to her first child, refused to give up meth, and continued to abuse it, despite the fact that her baby desperately needed her devotion.
The series contains several instances of sex, drugs, and physical abuse. Events like these are prominent and described in detail, but I believe Hopkins places these in her literature to remind the reader of the harsh truth of reality. Teens could benefit from this point of view, even if some situations are over dramatized.
If you enjoy picking up unique pieces of literature, please read this. I have mixed feelings about this series, but it's beyond worth it once you make the commitment. Dive into Kristina’s world. Submerge yourself in her story as the monster arches its back, prepared to pounce on its next victim. 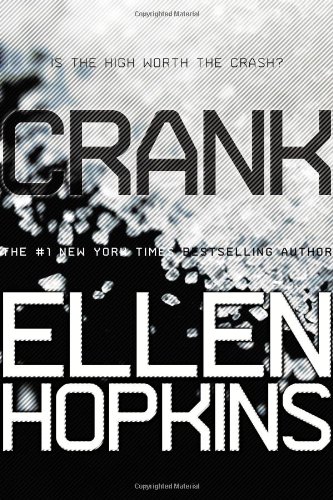 Favorite Quote:
"Nothing is impossible; the word itself says 'I'm possible'!" -Audrey Hepburn

Favorite Quote:
"There are none so blind as those who refuse to see"

View profile
Ellen Hopkins is my favorite author of all time and your review of this book is absolutely fitting. I hope you go on to read more of her books because they are just as enchanting as this one. Fantastic job! :)