The Statistical Probability of Love at First Sight by Jennifer E. Smith | TeenInk

The Statistical Probability of Love at First Sight by Jennifer E. Smith

Favorite Quote:
"I love books. I love that moment when you open one and sink into it. You can escape from the world, into a story that's way more interesting than your's will ever be." -Elizabeth Scott

Jennifer E. Smith demonstrates well how everything happens for a reason in her book The Statistical Probability of Love at First Sight. It was published by Poppy on January 2, 2012 and has been read by many people since. It is set over the course one day and showcases how the irony of life can sometimes turn your life upside down. The story features a young girl named Hadley Sullivan whose life gets turned around and sent into a crazy spiral of events because she missed her flight to London by four minutes.

Jennifer E. Smith grew up on the outskirts of Chicago. She was quite adventurous though, and decided to go to Scotland for college. She ended up at St. Andrews, where she earned her masters degree in creative writing. Jennifer is the author of six young adult novels, which have been translated into many languages. New York City is now her home, as well as the site of her job as an editor. While writing The Statistical Probability of Love at First Sight, she had the most fun creating the character of Oliver. Hadley, though she’s the main character, was more of a challenge. Overall, Jennifer had a great time writing this book and found that it came fairly easily to her.
As I mentioned before, the main character is Hadley Sullivan. She’s a seventeen year old girl who lives in Connecticut with her mother. Her father had gone over to London two years before to teach at Oxford for a semester, but it turned out to be a mistake. Hadley’s father never came home. It didn’t take too long before she figured out the truth. Her dad was having an affair because British woman, Charlotte, had captured his heart. He wasn’t coming back. That alone was bad enough. For Hadley, however, it got even worse.
She had to participate in her father’s wedding! She was going to fly over to London and be on e of the bridesmaids in the wedding of her dad to a woman that Hadley had never met.Of everyone involved, only Hadley was opposed to the idea of seeing her father and being in the wedding, so she had to go. Unfortunately, she misses her flight by four minutes and is forced to wait for the next flight. During her wait, she meets a British boy named Oliver. They hit it off and spend the whole seven hour plane ride talking. The whole time, Hadley believes that he is going to a wedding also, but realizes that it is his dad’s funeral. Using one crazy hint, she leaves the wedding and scours London to find Oliver. She does, but is disappointed by his reaction. Hadley heads back to the reception after accidentally leaving him a clue about where to find her. Now, it’s up to a lucky twist of fate and some bravery on Oliver’s part to get them back together.
I recommend The Statistical Probability of Love at First Sight wholeheartedly! It is fast-paced, full of emotion, and the storyline has a unique message. You can always count on action and lack of time for the characters to do what needs to be done. Also, the book is overflowing with a unique mash-up of feeling, from love, to fear, to anger and confusion. Most importantly, there is a unique message. You learn that everything happens for a reason, all the while seeing how you should never give up on love. Love prevails every time. The Statistical Probability of Love at First Sight is worthwhile read, without a doubt! 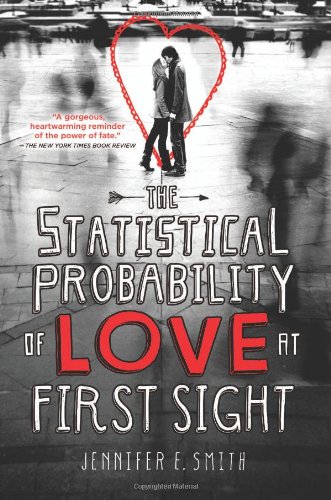 
Buy from Amazon
The author's comments:
This is an amazing love story! Don't let the name fool you; it's not at all mathematical!
Post a comment
Submit your own

Favorite Quote:
"Never regret something that once made you smile." - Amber Deckers

"Stories are more than just images. As you continue in the tale, you get to know the characters, motivations and conflicts that make up the core of the story...." - Livia Blackburne

View profile
Totally sounds like a book I would read... have to check it out at the library!