Everyone likes a quick-paced, heart-stopping, death-defying action novel, don’t they? I do anyways, and that’s exactly what I found in Joe Schreiber’s Au Revoir, Crazy European Chick. But, this isn’t your typical action novel. Sure there’s plenty of thrills and chills, and it does take place in New York, but what’s different is the duo of main characters.

Percy Stormaire wasn’t planning to go to prom. Despite being decked in a snazzy suit and driving his dad’s Jaguar, he wishes he were in New York, playing with his band at their first real gig. The reason why he can’t go? His mother has forced his hand and has him haulin along the (supposedly) geeky, awkward, and frankly not all that attractive foreign exchange student, Gobija Zaksaukas. Percy is bummed. He was supposed to be rocking out with Inchworm (his band). Instead, he’s stuck babysitting a weirdo.

Or is he? As Percy will find out, looks are not everything, and after a brief altercation at the dance, the pair are zooming out to the city in Mr. Stormaire’s Jaguar. Why, one might ask? Turns out that Gobija is not just an exchange student, but an assassin, and prom night is the one night of all nights that all of her targets will be in the city.

What follows is one rip-roaring ride of danger, suspense, and even the occasional joke. Schreiber crafts a story that is so ridiculous that it hardly seems real, yet so gripping that you can’t stop turning the page. Action-adventure and comedy rolled into one, Schreiber writes with finesse.

However, Au Revoir, Crazy European Chick, does not offer any especially compelling themes and or morals, and this may be its only downfall. Then again, with a title like that, who is expecting a lesson in philosophy? 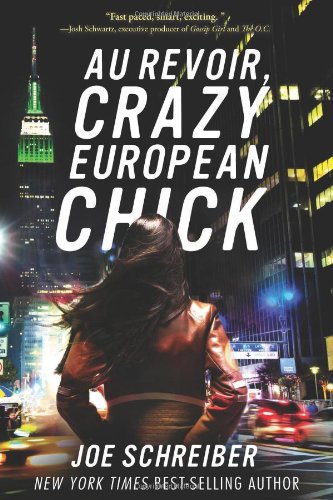 
Buy from Amazon
The author's comments:
I wrote this review on a book that I read for my school’s Battle of the Books competition. If you’d like to read other reviews on other B.O.B. books check out my profile. Thanks!
Post a comment
Submit your own