Piper is the 18 year-old manager of the high school band dumb. Making a bet with the lead singer she could get the rock band Dumb a paying gig. If she does she gets to share the pay. If she doesn't she’ll get humiliated. Yet there one problem. Piper is deaf. She has been since she was six.
The first and lead singer is Josh. Arrogant preppy boy, think he has it all. He was one of the original members of the band, and won’t let anyone forget. Yet he has a weakness. A weakness that might just destroy the band?
The next is the bass guitarist Will. Brother to Josh, Will has been in the band since the beginning. Unlike his brother though he isn't as cocky as Josh. Will has his own talents and skill though, that will help the band in its greatest need.
Rocker chick Tash. Lead guitarist and the third original member of Dumb. She has her issues, her past, and a secret crush.

The non-original member drummer Ed. Chess pal with Piper, Ed has been a secret drummer forever. Working with the band, Ed found his voice and made peace with the other band mates. But like Tash he has a crush. Even though she doesn't know it; for everyone else it is obvious.
Yet ever band needs it talent-less eye candy. This is where Kallie fits in. Voted it by Josh, Ed and Piper, Kallie soon finds herself as the face of the band. Yet Josh has something else in mind for her, and when she refuses a drift is castes between him and the rest of the band. It’s up to Piper to fix the rift, or just to let it go.

The band has it problems, and with a deaf manager whose having a trouble home life. Will Piper be able to save the band? Or just let it die out in flames? Antony helps capture the life of a high school band that’s trying to make it big. With Piper he made a girl who hasn't been that musically culture becomes a rock star manager at age of eighteen. So join Piper after eighteen years of being the quite deaf girl, become Piper the manager of the hard rock band Dumb. 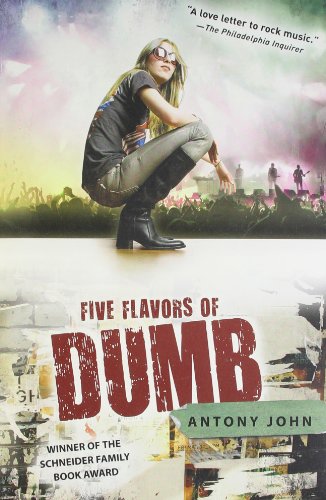 
Buy from Amazon
The author's comments:
Music and hearing don't always go together.
Post a comment
Submit your own