Beyond the Mountains of the Damned by Matthew McAllester | Teen Ink

Beyond the Mountains of the Damned by Matthew McAllester

The book Beyond the Mountains of the Damned by Matthew McAllester is a powerful book centered on the war in Kosovo and how it differed from that of the rest of Eastern Europe. He presses that the gang lifestyle in Kosovo, the lack of media coverage, and the lack of proper NATO reaction, made the war in Kosovo, and especially in Pec worse than it was in any other place. His argument is very clear: that because of the lack of media coverage in Kosovo the war was worse than it was in other parts of Eastern Europe but not known, so in turn, not cared about. Nor was there very much help given to the country other than a good bombing.

Because of the lack of free movement with journalists there was little known about the war. There was little to no media coverage. Most everyone knows about what happened between Serbian and Bosnia-Herzegovina. That was well covered on the news and in newspapers, on TV, etc. Little to nothing was said about Kosovo, just a blip from outside information. Just NATO saying that they had it under control. It was a minimal loss situation, but it wasn’t.

The war was brought about between the Serbs and Albanians, and in Kosovo, the Serbs were trying to destroy the Albanians. From one perspective, as McAllester used many, the big picture, shows that the Serbs tried to ethnically cleanse Kosovo of Albanians (the same happened Bosnia) through killing and burning. This brutality was intense because it was not really enacted out by the army, the army supported it (and it was the body-picker-upper) but it worked hand in hand with the paramilitary which was made up of junkies, prisoners and other lowest of the lows. On page 33 it says: “Moving through the town, holding Albanians hostage until they paid up was quick work.” and “The state and criminal world work smoothly together” and “It is astonishing how a man can turn into a beat in such a short time.” McAllester also showed how perfectly “good” people were set on this path of destruction, as McAllester himself speaks to those who were in Mrtvi’s gang called Lightning (Mrtvi means Death). Mrtvi was the leader of the most notorious gang that was destroying the homes of Albanians and their lives, and whose gang ripped apart the family of one of the men who McAllester follows throughout the book, who brutally came in the home, set everyone together, raped the women, shot the children and then the adults, left the paralyzed to die and went about chasing after Isa who was running with one of his sons to get away while Isa’s wife was alive, but barely after having shielded her children from bullets, although they died soon. It was a war that was ruling with murder that was largely untold.

McAllester is very successful in conveying emotion and using pathos. Early on in the book, while McAllester follows Isa Balla’s story the reader will find out how the Albanian children are treated, no longer getting to go to school, and as time progresses, they have to stay inside to be safe, while the Serbian children are outside playing games and doing kid things. Isa is hiding away in his house so as not to be found out by the Serbs, and to keep his family safe. He does not want to leave and will not risk leaving, although the risk is and will be high no matter what. All the while, Isa’s brother is drinking himself into oblivion, turning his role into but a blurp of a man sitting on a couch either passed out or with a hangover. And even later, most of Isa’s family being slaughtered conveys real and painful emotion that is truthfully a hard part to read. The whole idea of humans being turned into things less than animals is quite concerning. The author is successful at diving deep, deep into the life of Isa and his family, showing how their world is destroyed and turned upside down, but he is also quite good at looking at the big picture. On page 172 it says “These people were fit for the lunatic asylum”, speaking of those who acted out what Mrtvi wanted, their reasoning being that they had to kill even the children because one day they were bound to do bad things to Serbs. Yet one of the gang members who had to kill showed a tiny bit of remorse, saying on page 180 “It wasn’t my war. It wasn’t his war. He wasn’t guilty.” Those involved showed dehumanization, and after that, an addiction to killing like a drug. McAllester is very, very good at making points, but not in the reader’s face.

That big picture is the logos, and it shows how and why things are the way they are in Yugoslavia. It is recently after the Communist government in Yugoslavia went away and with it, al l the countries that were once lumped together have their independence but there are still grievances. There are a lot of ethnic tensions leading to the idea of ethnic cleansing especially between the Bosnian, Serbs and Albanians. In this story he also goes into the paramilitary and gang aspect of it. The colder things that act less upon emotion but real fact are touched upon like the KLA, the Albanian paramilitary trying to get rid of the Serbs, , the Munje, the Frenkis and the Tigers, the Black Hand relatively well known group of Serbian terrorists (most well known for killing Archduke Franz Ferdinand, but they did more, a lot more and lasted) but also NATO bombing the crap out of this area, and calling it a “virtual” war, although it was not virtual at all, it was real with real houses being destroyed and real people fighting it and real people dying in it. His statistics show that in the town of Pec alone 10,000 were driven out, and only a handful stayed and an unknown number of people were killed. In Kosovo over 10,000 people were killed and hundreds of thousands of people were displaced.

Most of all that stood out was McAllester’s ethos; he was so credible it was amazing. No journalists were allowed into this area, but he got in somehow anyway because he wanted to know what was going on. All the information in the book was completely first hand, coming from the people in it, both from Isa, Mrtvi, those in the gangs, those in the paramilitaries (on both sides) the doctors in the hospitals, the refugees, and family members, displaced people and all. Anyone who was affected had a place in this book, somehow. He did not leave out any bit of information that was relevant.

Although some of the cold stuff was a weakness, at times he really hit hard on the government things that made it hard to really dig in and read it well. It cut off some attention. The back-story is detailed and if someone has a short attention span, it is not a good thing.

Yet the weaknesses are outweighed heavily by the strengths. Although the author is a journalist, and one can tell through the writing how he tries to be detached from something so real, harsh and emotional, but as he is there in Kosovo, one on one, speaking to the survivors and those who acted out the terrible things, it is clear that his emotions and confusion seep into his writing, which gives the piece a trustworthy air, but also not something cold and far away, it is right there, very real, very intense really and it is written so perfectly. Every word is in place to make it something that is not just a piece of history in some textbook, one would actually be interested, and want to read it, to desperately with everything in them, see what happens. 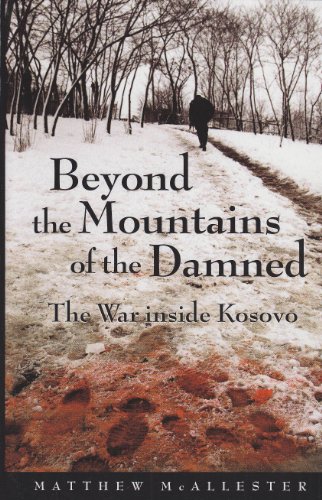 
Buy from Amazon
The author's comments:
This is for my English class, a rhetorical argument about a non fiction book we got to pick. It is an amazing book!
Post a comment
Submit your own