The Kite Runner by Khaled Housseni

The Kite Runner, Khaled Housseni’s first novel, is centered on a boy named Amir who is the insecure narrator of the story and his closest friend Hassan who was his father’s Hazara servant. The story is mostly talking about the boys growing up in Afghanistan in the closing years of the monarchy and the first years of the short-lived republic. Amir feels he betrays Hassan by not coming to his aid when Hassan is confronted by a bully Assef ,a notorious sociopath and violent older boy. He brutally beats up Hassan and annually rapes him all because Assef considers Hassan inferior to him as he was a Hazara and because he was threatened by Hassan’s courage ,as Hassan was not scared to defend Amir and fight for him every time Assef bullied him. The feelings of guilt and redemption grow in Amir and shape him up into the person he becomes. Amir further forces Hassan and his father Ali to leave his father’s services. Soon the communist regime comes into power and him and his well-respected father, Baba, move to the U.S. Where he meets his future wife. Baba soon dies and Amir receives a letter from his father’s good friend Rahim Khan in whom Amir would see a bigger father figure compared to the one his biological father had presented to him, during his child hood in Afghanistan, asking Amir to return back to the Taliban dominated Afghanistan and on this journey he is revealed to his families past secrets and learns the truth behind himself.
The novel has its pro’s and con’s. The productive side was as to how to readers are given an insight into a different and interesting side of Afghanistan. The voice is believable and hence the page turner becomes complex and suspenseful. The contrary included the intense environment described in the book and the potentially upsetting content that is not well suited for children such as the pedophilia, drug abuse and sadism.
The book has been subjected to accused and criticized of describing the Taliban as doers of various social evils which they are not commonly attributed to such as Assef’s pedophilia, Nazism and the executions.
The story isn’t only about redemption or the themes of guilt, it describes humanity, and it is about humanity in itself. It teaches its readers about how hidden secrets evolve a man into what he becomes. It’s a heart tendering story about friendship, in its loyal and cruel state. The matter in the story explains human survival and acceptance which we see in the case of Amir and Baba’s relationship and their journey from privileged and luxurious life in Afghanistan to settling into a middle class lifestyle in a foreign country. Humans being the flawed creatures they are refuse to set differences aside, even if they do, in the back of the head they refuse to accept other people just as society in its whole never let Amir and Hassan be friends because one was a Shia and one a Sunni and one poor and one rich.
Nobody looked at the non-materialistic differences as how Hassan’s love was heavier compared to Amir’s or the difference between the boy’s loyalty and bravery. If society was not subjected to such prejudice Amir would have had a calm mind set towards Hassan. This explains how judgments can alter thoughts and set motion to actions that give rise to redemption in the later years. This is a novel which explores many themes: family loyalty, the rigidity of religious division, the cruel effects of war, and the power of love.
Housseni’s writing is simple and powerful; a no frills spare style which stuns. The violence in the book is painful to read and heartbreaking.
The deeper meanings of the book grow as the reader progresses through the chapters. From time to time we see comparisons of human characteristics come out such as Hassan’s bravery and loyalty and Amir’s cowardice attitude. We see the nature of evolvement as we see Amir come back to “be good again” as Rahim Khan put it. The evolvement is the reaction of suppressed guilt buried deep underneath to avoid confrontations and blames that might be put. The suppression itself was cowardly as well as insensitive as Amir let Hassan bear the pain himself and only tried to get rid of him rather than at least apologize about not being able to defend Hassan or help him in front of Assef. What Amir witnesses changes the direction of his friendship forever and sets motion to events that have lifelong consequences.
Without a doubt my favorite character is Hassan, the way Khaled Housseni has explained his beautifully loyal and admiringly brave personality is remarkable. He shines as a light of hope in a world of bad, and even though had committed no theft he gave into the blame just to prevent further chaos and cause damage. What’s inspiring is that his character was so firm on the stand of goodness that he did not need to evolve as such, because he remained trustworthy and righteous from the beginning. Amir on the other hand also contained some amounts of bravery as he managed to go back and makeup for his sins but all this was because of how Amir was intrigued by Hassan’s loyalty towards him. Hassan represents good in bad days, hope in hard ones .In a twisted manner he seems to give me hope through his solidarity and composed personality.
During the tumultuous course of events the characters became real and you become attached to them. Amir’s voice became so believable and real that it was easy to sympathize with him, be angry with him and cheer for him at different points.
The novel has a long lasting effect on it's readers and is a highly recommended book. Throughout the pages life lessons on love,loyalty and culture are learnt as the plot deals with universal concepts. It is a fine peice of literature. 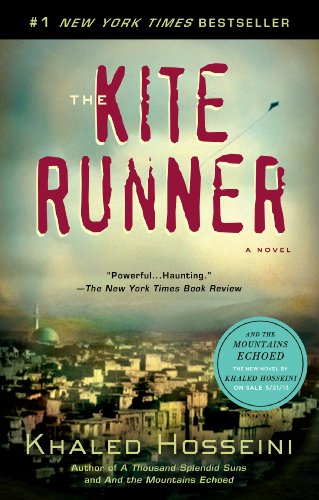