Favorite Quote:
"History is the witness that testifies to the passing of time; it illumines reality, vitalizes memory, provides guidance in daily life and brings us tidings of antiquity."
Cicero--Roman author, orator, & politician (106 BC - 43 BC)

Unlike his 8-year-old daughter Kellyanne, Rex Williamson, an opal miner, doesn’t believe in the existence of Pobby and Dingan, Kellyanne’s imaginary friends. Her peculiar behavior with regard to her friends puzzles the family.


“Jesus! That girl’s around the twist,” Rex says.

After a child reaches a certain age, society frowns upon any imaginary friends he may have. Ashmol and his father both avidly believe that Kellyanne will never make any real friends if she does not give up her invisible friends, Pobby and Dingan. Her mother blames Kellyanne’s lack of real friends on the fact that the family lives in the small opal mining town of Lightning Ridge, Australia, where she claims there are only “...holes and criminals and freaks...”. The hope of one day finding opal keeps the family in this little town, but unfortunately, in the past two years, Rex has not found any. This novella describes the limitless love between family members and strength of family bonds through tough situations.

Although Kellyanne’s attachment to Pobby and Dingan is incomprehensible to her father, she takes her imaginary friends all around town, and the “older, softer sort of folks” take a liking to them. Despite their exasperation, her loving family continues to humor her. Rex only realizes the depth of Kellyanne’s bond with Pobby and Dingan when he takes them on a trip to the mining claim and, being drunk, forgets to pretend to bring them back. Kellyanne instantly notices the absence of her friends, and is so distressed that her father and Ashmol rush back to the claim with her. Sadly, they are unable to find Pobby and Dingan, and immediately Kellyanne begins to worry. She falls into severe depression and refuses to eat. Ashmol had made it clear in the beginning that he never believed in her imaginary friends, but as her health deteriorates, it becomes imperative that he finds Kellyanne’s imaginary friends before she disappears in front of his own eyes.


The small town setting and the description of the intense bonds and ambivalent emotions that exist between the main characters found in Ben Rice’s Pobby and Dingan are similar to that of Of Mice and Men by John Steinback. In Of Mice and Men, the few characters allow Steinbeck to illustrate the setting in clear detail. However, unlike Steinbeck, Rice spends little time describing the setting and instead details the various characters until they are lifelike. Throughout the plot of Of Mice and Men, the main character George, acts as the protector of his disabled friend Lennie, and although many times George is frustrated with his role as Lennie’s caretaker, George truly cares for his friend and it becomes apparent at the end that George would do anything for him. In Pobby and Dingan, even though Ashmol disapproves of his sister’s imaginary friends, he desperately makes the effort to find them, so that Kellyanne can recover from her depression. Both these books are able to portray the feelings of compassion and deep devotion between people, stirring the reader emotionally and perhaps even causing him to reevaluate his own relationships. Ashmol’s role as a protector who is willing to go to any length is also similar to the role of Atticus, a defense lawyer, in To Kill a Mockingbird by Harper Lee. In this novel, Atticus defends a black man in a highly racist town, and although he is mocked and taunted for his decision to represent the black man, he still stands by it. He believes in his clients and is willing to stand up against anyone to stay true to his responsibility, just like Ashmol.


Rice does a phenomenal job in creating quirky, unique characters that are memorable and exciting to read about. Although the author’s style is simple and concise, the symbolism of each action and the emotion behind each word greatly impacts the reader. Kellyanne’s loneliness and inability to connect well with other children was the original reason for the creation of her imaginary friends, but ironically, by having imaginary friends, she is able to gain real supporters as well. Unlike many novellas set in small towns, this one is fast-paced and continuously unpredictable. The characters are described in little words, but yet they are so developed that by the end of the novella, it is easy for the reader to picture them and anticipate their reactions. Pobby and Dingan’s strong, relatable tale will leave no reader untouched. It manages to blur the line between imagination and reality, and makes all readers, young and old, make believe again. 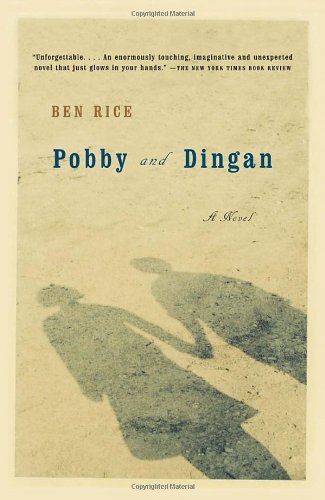 
Buy from Amazon
The author's comments:
I was not particularly fond of this book the first time I read it. But when I really thought about all the events in the novella and tried to analyze what the author ultimately wanted to convey, I realized the simple beauty in the short story.
Post a comment
Submit your own