Favorite Quote:
Hearing voices no one else can hear isn't a good sign, even in the wizarding world.
-J. K. Rowling

The first time she saw Bryce Loski she fell head over heels in love. The first time he saw Juli Baker, he ran.
For years Juli dreamed of one thing: her first kiss from the boy with those gorgeous baby blue eyes. Nothing else seemed to matter. But when Juli’s favorite sycamore tree is threatened by developers, life begins to change. As Juli fights for something she truly loves, she begins to see people in a different light. Things, for years, she thought to be important, become things she can live without; and people she thought to be the center of her universe, become nothing more than a star in a faraway galaxy.
But life for Bryce Loski is about to drastically change also. Ever since he was little he’s wanted nothing more than for Juli Baker to disappear. But after a egg fiasco, and an awkward apology, and that newspaper article, he starts to wonder if maybe he was wrong all along.
When I first picked up this book it looked short, outdated, and quite worn ; nothing particularly special. However as soon as I’d finsihed the first page I was hooked, and hungrily devoured the rest of the book. I admit that I spent the rest of the day flopped out on the warm grass eyes glued to my book, getting lost in the funny world of Juli Baker, and Bryce Loski.
Uniquely written, every other chapter shows the same scenes and events, only from the other’s point of view, you see how the saying, “Two sides to every story,” is true. You are able to see both Juli and Bryce’s reasons for doing what they do and saying what they say…not just what the other sees.
Hidden underneath the tough attitude of Bryce, and carefree life of Juli you can see a lot of vulnerability that teens so often try to hide. As a teenage girl, I’ve had my heartbroken, felt the unrelenting drama of middle school, experienced my share of joy and sorrow, so it is easy for me to relate to them. The story may lack a little jazz in a few places, but the detailed, in depth writing makes up for it.
Flipped by Wendelin Van Draaen is a twisted love story for kids and teens to enjoy. Wendelin painted a great picture in my head that’s hard to forget. I recommend this to people who love to become part of the story. 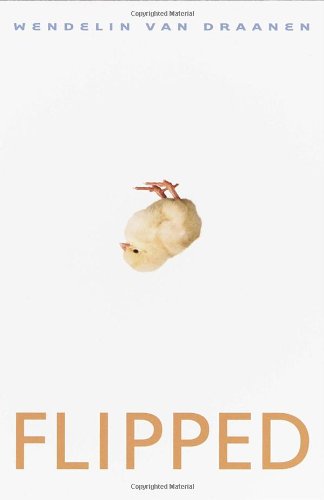