Harry Potter and The Half Blood Prince by J.K. Rowling | Teen Ink

Harry Potter and The Half Blood Prince by J.K. Rowling

Harry Potter and the Half Blood Prince is an intense, sensational award winning book that came straight from the heart of author J.K. Rowling. David Yates, director, took and exotic book and turned it into a movie that captures the watcher’s eye. Nevertheless, director David Yates added adventures that the reader could never have thought would appear on the big screen. These stories bring adventure to the world, as well as the interpreters mind.

Hogwarts School of Witchcraft and Wizardry is a castle as large as seven skyscraping towers conjoined in both the books and all seven movies. Readers around the world could feel the mass of the splendid castle as if they were looking up at it themselves. The books stated that Hogwarts was a cloud surrounded, large castle where children were almost always scampering to get to class. As in each extravagant book, the films include that witches and wizards over the age of seventeen can’t aparate and disaparate inside the grounds of Hogwarts. Apparating and disapparating is where witches and wizards over the age of seventeen can appear and disappear in midair. Hogwarts is very vivid in the movies and books, as well as in a person’s minds while reading the books and watching the movies.

Harry Potter is the main character in the Harry Potter series. When Harry was only about one-year-old when Voldemort, also known as Tom Riddle, came to power as the darkest wizard in the history of magic. On October 28, 1981, Voldemort killed James Potter, Harry’s father, while trying to save his family. Shortly after, Lily Potter, his mother, refused to let Harry die at such a young age, and gave herself up. When Tom tried to kill Harry using Avada Kedavra, the killing curse, he did not die. This left a lightning-shaped scar on his forehead, covered by his messy jet-black hair. Harry’s scar is barely visible in the movies, whereas in the books, it is described to be as visible as a full moon in a clear night sky. When Voldemort could not kill Harry, he came down. From that point on, Harry Potter, the boy who lived went to reside with his Uncle Vernon, Aunt Petunia, and Cousin Dudley. The family did not appreciate him. They treated him like he was scum, forcing him to live under the stairs in a tiny closet. The Dursley’s were shown exactly as they were described in the books. From ages eleven to sixteen, Harry got to escape from them by going and living at his school.

Albus Dumbledore was the headmaster of Hogwarts. In the sixth book, ‘Harry Potter and the Half Blood Prince’, Professor Severus Snape killed Dumbledore. Harry and Albus had just returned from searching for part of a Horcrux, part of Voldemort’s soul. Dumbledore had just drunk a potion that made him extremely feeble. In the scene where Snape murders Albus, the book described it as an intense killing. The movie shows Severus performing the spell very calmly. A jet of green light hit Albus right in the chest, as he flung back from the power of the wand. His scream stayed in him as he stood under the spiral staircase. When everyone fled, he didn’t run to the headmaster’s side, as portrayed in the book. Dumbledore lay there, dead as a daisy in the middle of winter, for this was the end of Albus Percival Wulfric Brian Dumbledore.

All in all, this was a tremendously action packed, heartwarming book. There is not a moment in this book that the audience would take an eye off. J.K. Rowling put a lot of time and effort into publishing a stupendous book like this. The Harry Potter series is published in over 69 languages, which shows just how much the books are appreciated. Harry Potter and the Half Blood Prince was truly an amazing story. 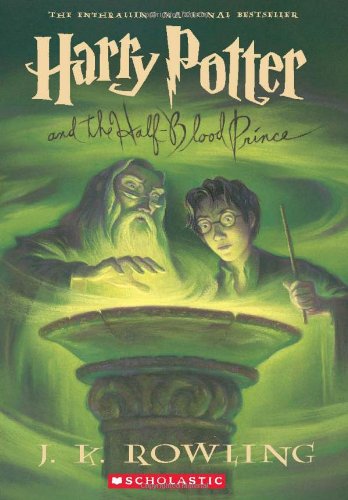 
Buy from Amazon
The author's comments:
I wrote this piece just to show how different books and movies can be, so make sure you don't just watch the movie, take the extra time to indulge in an amazing book every once and awhile.
Post a comment
Submit your own