The Amulet of Samarkand by Jonathan Stroud | Teen Ink

The Amulet of Samarkand by Jonathan Stroud

When I first received The Amulet of Samarkand from my father as a gift, I turned my nose up at its unappetizing cover, which, on my copy, was a gnarled demon grinning wickedly at the reader, a golden amulet dangling from its spindly fingers. The book gathered dust on my bookshelf for a few years at least. But this book showed me the meaning of “don’t judge a book by its cover”! As soon as I picked it up and gave it a good read, it captured a place in my heart as one of my top ten books.


The Amulet of Samarkand is the first book in The Bartimaeus Trilogy by Jonathan Stroud. It is set in London, but wait! This is not London as we know it. The twist is that England’s government officials are all magicians, who tyrannize the commoners using the magic of demons.

Nathaniel is a young boy who, like all magicians, was taken from his parents to be raised as a magician. Against his master’s wishes, Nathaniel summons the demon Bartimaeus to steal the Amulet of Samarkand, a powerful magical trinket in Simon Lovelace’s possession. Nathaniel plans to use it as proof that Lovelace is a murderer.

The book is written in first person… from Bartimaeus’s point of view.

The fantasy world Stroud weaves in this book is breathtaking in its originality. In a twist on the common portrayal of demons, the magicians are the evil ones, cruel taskmasters enslaving demons who would be perfectly happy to never see another human again.

Even with how serious the plotline is, this book is the most hilarious teen fiction book I have ever read. It’s wonderful to read a funny teen novel that isn’t a parody! Bartimaeus, the storyteller of this book, is a 4,000 year old djinni with all the jaded wit and humor that you would expect from such. While the plot starts grave and gets grimmer by the chapter, his sarcasm had me busting a gut throughout the whole story. Bartimaeus has quite a distinctive voice; his personality practically radiates off the pages.

Stroud did something clever, nay, ingenious, with this book; he peppered it with footnotes. If you don’t know what a footnote is, it is a small number such as this1 that is often used by authors to accredit a source; however, in The Amulet of Samarkand, the footnotes are used to interject Bartimaeus’s humorous opinions into the story without breaking up the flow of what is otherwise a jaunty, fast-paced ride.

It’s chock full of humor, but that’s just icing on the cake; the true allure is in its characters.

Stroud focuses on the characters’ personal growth journeys. While this book has a good plot, the characters are what make it so fantastic. I enjoy reading an author who does not baby his characters. Whenever Bartimaeus or Nathaniel—especially Nathaniel—makes a poor choice, they have to face dire consequences. For example, thanks to Nathaniel summoning Bartimaeus, who is far more dangerous than he can handle, his entire adoptive family is killed by Lovelace and the demon Faquarl. And it keeps getting worse throughout the book.

Nathaniel makes a lot of mistakes, but Stroud has a way of making you root for him. You see that Nathaniel has a good heart, but you have to grind your teeth at some of the choices he makes. He’s a born and raised magician. All his good intentions are smothered by the cutthroat world of magical politics. But Stroud does not make excuses for him; he doesn’t sugarcoat it. Because the author does not protect his characters from the consequences of their actions, they get to grow.

And grow they do. The plot is good, the writing is great, but Stroud’s focus here is on the characters, their interactions, their flaws! Again and again, he kicks them while they’re down; he forces them to question motives; he brings them outside their comfort zones. It’s an adventure story, it’s a fantasy story, but more than anything it’s a coming-of-age story—even for Bartimaeus, who finally gets the impression that maybe, just maybe, not all magicians are evil. (4,000 years old is a little late to “come-of-age”, Bart!)

All in all, it’s just nice that Stroud expertly manages a fascinating premise, lively setting, and delicious conflict without losing his characters in the mix.

The action is jarring; the dialogue is witty and swift. Whatever more could a reader want?

Well… that’s a paradox in Bartimaeus’s case, but I digress.

If you like characters that are pure as the driven snow, you’ll despise this book, but if you’re looking for character flaws, you’ll find plenty here. Stroud writes characters that are squarely in the “moral grey”, but the emotional journey they make throughout the trilogy is very complex, and very believable.

Second, the descriptions. There are some long chunks of descriptions stuck in here, guys. Interjected with Bartimaeus’s hilarious sarcasm, sure. But this book is pretty even on the description-dialogue-action ratio. If you don’t like reading lengthy chapters, this isn’t for you.

Also, Stroud style is original and surprising, but with more reads of the book, I have to admit the story can be blocky in spots. The beginning, which sets up Nat’s childhood, is a slow, and I find myself speeding up on Nat’s parts so I can get to the vim and verve of Bart’s chapters.

The Amulet of Samarkand has religious implications too, of course. There are demons, pentagons, summoning, magic, etc. There were some Biblical jibes in there, as well; for example, Bart will brag to anyone who will listen about meeting King Solomon, who is an important Bible character.

I’m religious and it didn’t bother me; I actually thought it was funny. However, if you’re the kind of person who burns Harry Potter books because of witchcraft, you will be uncomfortable with this trilogy.

And, lastly, The Amulet of Samarkand has a rather unsatisfying ending. The bad guy is defeated… supposedly. Nathaniel has matured emotionally… but you are hinted that it might not last. Bartimaeus is freed from being enslaved by Nat… but the two never really come to an agreement, only awkward tolerance. You’ll finish this book and think incredulously, “Is that the end?”

And the answer is, no. It’s not. That unsettled feeling you have? That nagging, skin-crawling sensation that it isn’t over yet? It was written that way for a reason. There some grim foreshadowing here, and it will leave you craving book two like a drowning swimmer begs for air. You want MORE!

If you like every book to tie up neatly like a nice little package, this trilogy isn’t for you, because weaving throughout each book is an insidious scheme that won’t come to full fruition until the last book. (And between you and me, the last book, Ptolemy’s Gate, is the most stellar ending I’ve read in a long time.) I guess you’ll just have to finish it up to be sure.


In Conclusion…
(Or, as Bart would say, “Just something to remember me by”)

The Amulet of Samarkand is a great book with lovable characters that will keep you invested in the story from cover to cover. If you dislike morally grey characters, flowery descriptions, religious taboos, and cliffhanger endings, close this review right now and move on with your life.

But if none of that stuff bothers you, go buy this book right now. You won’t be sorry. 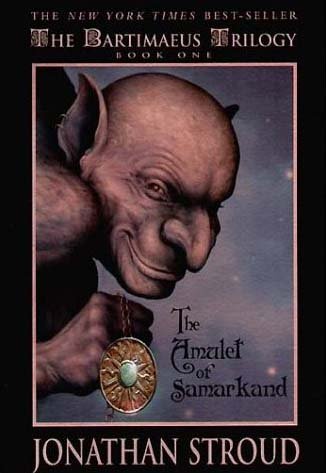 
Buy from Amazon
The author's comments:
This trilogy has always been one of my favorites. It may not be the best LITERATURE I've ever read, strictly speaking, but it'll have a fond place in my heart.
Post a comment
Submit your own