Amusing Ourselves to Death by Neil Postman | Teen Ink

Amusing Ourselves to Death by Neil Postman

Amusing Ourselves to Death, by Neil Postman was an insightful view of the possible effects of television on public discourse. Postman begins his book with his opening argument, explaining that television and media is causing humans to be demoralized and silly. Postman’s argument is rather cloudy although he gets across the point that people think now in images instead of words.

He says that media is a peak, like a window into the world of those who consume it, whether through the news, music or games. He makes a good connection between his book and Huxley’s Brave New World presenting how we will become a sad people through being controlled not by a tyrant government but instead our own silly pleasures.

Postman’s argument, though, is biased and he is quite rude throughout the whole book exclaiming that humans have chosen to become dumber and dumber and it is the worst in the United States because of the melting pot effect. This stood as a shock to me because his voice is clearly that of an upper middle class white man, meaning that he was once an immigrant.

Postman also states that even anyone in the government is also affected by this “silliness” meaning that they have to use common language for both the audience and for them to understand. He makes this argument like he is the only sound human being left on this earth except for tribal people without a written language at all because “they are not affected by the media”.

Postman’s argument though, was not without some commendation as he does point out what is good about reading, saying “To engage the written word means to follow a line of though, which requires considerable powers of classifying, inference-making and reasoning… it also means to weigh ideas, to compare and contrast assertions, to connect one generalization to another”. I believe that this is a good point, although surrounded by some more ‘blown up’ ones.

Yet throughout all of the criticism I find it worthwhile to read, giving another prospective on television and modern media. It has me second guessing when I turn on the TV to see a news show where puppies and dancing and the host is all decked out and caked in makeup, talking about rather meaningless subjects. Or even better yet when the subjects are meaningful followed and preceded by meaningless commercials, expressing the commercialization of this world. Also it made me think about the modern government and how people judge on character instead of the quality of the candidate, which I find rather surprising that it has come to this, but overall, despite the long-windedness of his rant, I found it a good read. 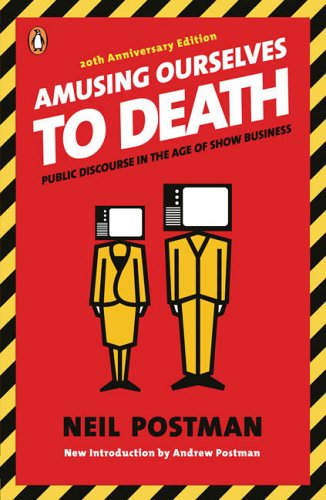 
Buy from Amazon
The author's comments:
I read this book for my English class and found that it did have a lasting effect on how I thought about media. He made a good argument.
Post a comment
Submit your own