The Mad, The Bad and The Innocent by Dr. Barbara Kirwin | Teen Ink

The Mad, The Bad and The Innocent by Dr. Barbara Kirwin

Kirwin steps the reader through her interviews with varied killers, con artists and others trying to avoid justices, such as Joel Rifkin, who was a liable candidate for the insanity defense. Also, Ann Green, who suffocated two of her children and attempted another, but was able to get away with it. Kirwin goes through a minimum of ten hours face to face with the defendant and notes everything including behavior, body language, thought patterns, and reactions. She looks for the mental state of the defendants’ mind at the time. To do this, she uses standardized tests including the MMPI (Minnesota Multiphasic Personality Inventory) to separate malingers and those who do need help.

In One chapter, Kirwin explores psychopaths, those who most often go for the insanity defense. As Kirwin says, “psychopaths are not crazy, but evil”. Psychopathy is a mixture of a lack of proper socialization and genetics, with “symptoms such as: substance abuse, stealing, lying and are selfish and impulsive.” She asks questions like “are some people just curse from the start?” This leads to the defenses only to corrupt justice.

Designer defenses, as Kirwin calls these curious defenses, are made famous by their basically absurd reasons for why people do what they do. One of the most famous cases that Kirwin speaks of is the Twinkie Defense, made by Dan white, who killed George Moscone and Harvey Milk, claiming that the sugar overload clouded his judgment. And many defense psychologists say what they say for money. Through this, Kirwin raises the question of whether or not the Insanity Defense does any good. She goes through that those who win the insanity defense, are not really mad and are able to beat the system and win over the doctors and nurses for more privileges.

Kirwin’s cleanly written book is well made and easy to follow through many individual cases involving different circumstances from what the media does to a case, harming it or making the public more aware, or even what happens when someone who is sane gets out on the insanity defense. She makes it clear why these people are sane and how they are malingering and how obvious it is to her. Kirwin, although the voice of her book is a bit egotistical, sounds very sure of herself and a normal mother and wife. She goes through the emotions of what a media shown case does to her home life, the fears that she has for her son and for her patients. She seems to truly care, which adds a genuine, and not cold, feeling to the book. Her words are all well chosen and she is very informative, especially about her opinion.

Kirwin feels very much that her way of doing things is the most effective. She repeatedly brings up how her tests are ninety percent accurate, as well as her gut and her way of getting the suspects off track so they slip up and say something that they probably shouldn’t have said. Kirwin feels that her many years of random trivia have helped her career by connecting to the accused and making them feel more comfortable so they end up saying things that send them to prison. Many times this works, but often she is amazed by the determination of some of the accused who “fake bad”. Kirwin explains how the tests are able to detect those who pretend to have an illness, as they over exaggerate the answers, and those who truly are insane.

Through Kirwin’s very interesting book, new light of the forensic psychology field is given to its readers. It is not a difficult book to read, and is actually quite easy. Kirwin’s intuitive approach and colorful word choice, plus her many years of stories in one book, make it enjoyable. I would recommend this book to anyone interested in psychology or even just a curious person about the United States of America’s justice system. 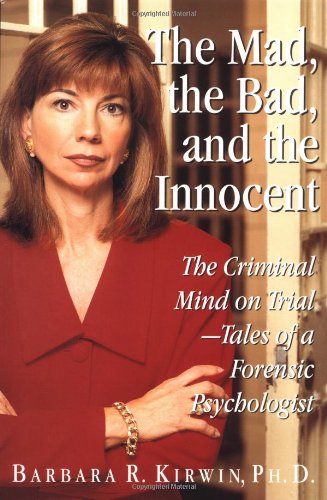 
Buy from Amazon
The author's comments:
I had to write this for AP Psychology but I think it turned out well and it was a really, really interesting book.
Post a comment
Submit your own