Ubik begins with a surprisingly typical action style premise. It is set in a future where people with psychic abilities such as telepathy or precognition are recruited to spy on businesses and are targeted by individuals with the ability to blot out their powers. The novel opens with an elderly gentleman at the head of a business of such psychic-neutralizing inertials organizing a team to take down a threat at a lunar base. The team includes out-of-luck employee Joe Chip who measures the psychic fields, and the mysterious young Pat, whose strange ability enables her to go back in time.

While it does start out rather confusing at first, by the time a reader has a handle on what’s happening it seems like a perfectly ordinary science-fiction adventure yarn. Of course, Philip K. Dick is writing and no sooner has the reader come to these conclusions when the rug is pulled out from under them and, indeed, the characters.

As soon as the team reaches the moon, disaster strikes and the survivors swiftly make their way back to Earth. This is when the real story starts. Coffee and cigarettes are rotted with age almost as soon as the team touches them, the phone book is out of date, and the face of their dead boss is showing up everywhere. To raise the stakes, something or someone is picking them off one by one in the most brutal and disturbing of manners. Joe Chip’s only hope is a strange substance called Ubik; the trouble is he doesn’t know what it is, where to get it, or even what it does.

In any other novel, Dick’s version of the future would be darkly comical. Here, one must pay five cents to open a door, half the population is clad in glam rock drag and the dead are preserved in cold-pac so that their friends and family might talk to them from beyond the grave. In Ubik however they are only a backdrop to a much bigger and more important story about reality, belief and death.

Ubik is fascinating and persistently exciting. With the variety of plot twists, characters can trust nothing, not even their own eyes. Not just a thriller, it’s also a cracking mystery which Dick executes with style. There’s a great amount of misleading, red herrings, and the solution is left out in plain sight where it won’t be noticed; all the components of the best mysteries.

Beneath all of the strange bits of futurism and exciting goings-on, there’s some typical Philip K. Dick brand of philosophy. Characters ponder death and theology as their reality slips away, question their situation and theorize, all the while racing against time. The excitement may mask some of the subtext but it’s without a doubt a mind-bending tale that will make any reader think, if only to wonder what is going on.

The questions here come fast and furious, so much that the conundrum supposedly center to the goings on, ‘what is Ubik,’ is easy to forget about. The answer is clearly not an easy one, nor is it ever definitely explained, and that’s probably for the best. With a solution as satisfying and clever as that which concludes this novel, it’s perfectly fine to leave a loose end or two. It’s all part of what makes Ubik so memorable, strange, and highly recommendable. 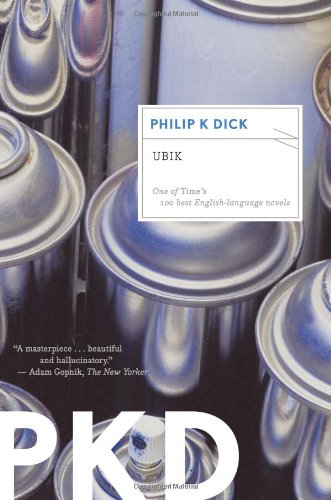