People are calling this book ‘the next Twilight’ and ‘the new Hunger Games’. But it’s so much more than just a copy. It looks like a hot romance chicklit, but it has a lot more depth than you’d expect.

Cassia lives in a dystopian world where the Society pretty much controls everything: where you work, what you eat and how much, and who you marry. I found the descriptions of daily life very natural- they didn’t seem like they’d been conjured up to make the book ‘cool’. During the Matching ceremony, Cassia is matched with her best friend/secret admirer Xander. Everything’s rosy until she opens a box full of information about her Match and sees another face: Ky. I know what you’re thinking, and to be fair I was thinking it too: Okay, so now the rest of the book will be about how Cassia deliberates back and forth over these two guys and eventually she’ll realize that one of them makes her heart flutter more than the other and she’ll run off with him into the sunset.

That is not even close to what actually happens. The story is so much more than a romance, and it has more shades than black and white. Though Cassia becomes increasingly disillusioned with the Society, I really like how the author included the other view, highlighting all the things that the Society was good for: the stronger people, the peaceful dying, and even the Matching. She didn’t paint her Society as some kind of dictatorial, oppressive regime that was clearly Bad with a capital B; most of the things the Society did made sense, and that made the book more realistic. It was very interesting to see the negative consequences of such seemingly beneficial decisions. This book subtly hints that absolute power and control corrupts, which is a pretty interesting and current topic. The writing style is fantastic, full of metaphors and profound realizations.

The book isn’t all about hidden meanings, though- it’s also a tender love story. The romance isn’t as scorching as the book jacket would have you believe; instead it simmers in the background. There’s no screaming arguments or passionate love scenes or dramatic heartbreaks, but the gentle intimacy of some of the scenes was shiver-inducing. This book will absorb you, entrance you, and leave you on your library’s website, watching the number of holds go down until you can devour the second book, Crossed. 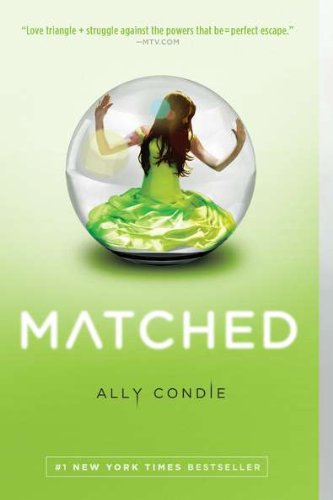