The Executioner's Song by Norman Mailer

:: Faith is to believe what you do not yet see, The reward for that faith is to see what you believe ::

** Why do we kill people who kill people, to show that killing people is wrong? **

A true story, The Executioner’s Song is a novel about a man named Gary Gilmore, a murderer and a thief. After being in jail for 18 years of his life, for a bank robbery when he was a teenager, his cousin Brenda bailed him out at age 35. As he tried to fit in, everyone was cautious of how to treat him and make his transition from jail to “the real world” an easy one. Making his way through life, Gary still stole from shops and slacked at his job, but didn’t get caught and now had family for support.

Soon Gary meets a wonderful 19 year old woman, Nicole, who has already been married three times and has two children of her own. On the first day meeting, Gary fell madly in love with her and tells her from the start “Nicole, I love you. I always will”. That night they claim their love for one another, make love and call it a relationship. They were together for months, until Nicole couldn’t tolerate the drinking and drugs anymore. Before Gary she wanted to be alone and find out who she is without men. Nicole didn’t want to have another man in her life, but there was something about Gary that drew her in. They had the same car, therefore it was destined, or so she thought.

Gary had stolen 12 guns and had them in the back of Nicole’s car when they went for a drive with the children. Nicole said that he was scaring her with the way he was driving, considering he was drunk and there were guns in the trunk. That was not how Gary wanted her to feel and started choking her. Soon she slipped out of the car and left for days. As a result of being in jail for half of his life, Gary did not know how to do deal with his pain and loneliness. With his anger he killed and robbed two innocent men.

After being arrested for his crimes, Gary was sent back to jail. Every day he would ask for Nicole, when one day she finally came to the jail. They started to send letters to each other. Inside were Gary’s true feelings, thoughts and emotions. Through the letters Nicole fell in love with Gary again, and that’s when he decided he wanted to die for the crimes he committed. "Unless it's a joke or something, I want to go ahead and do it," Gary said to officials about the decided execution. "Let's do it”.

Gary was not the first person to be executed in Utah, but he would be the first to ask to be killed. After spending over half of his life in jail, there was nothing left to live for. Nicole had realized that she never fell out of love with Gary the more he talked about death with her through the letters. They wanted to die together and live forever in the afterlife. After almost a month, Gary’s letters had convinced Nicole to smuggle in pills for the both of them and commit suicide together. No one would have to be killed or live lonely and they would live happily forever.

Both Gary and Nicole gave two attempts, but neither succeeded. As Gary was executed Nicole was in the hospital recovering from the overdose. After finding out about Gary’s death, surprisingly Nicole never cried, but was in shock for the rest of her life. Though she missed him tremendously, she felt that he was happy giving her peace. Just as Norman Mailer’s letters to his wife from the war became the book, The Naked and The Dead, Gary and Nicole’s letters were in the works of becoming a novel after he was executed, and resulted in being The Executioner’s Song.

Many different sources, such as PBS, A&E, Youtube, TruTV and NY Times, have news stories, documentaries and interviews with Gary Gilmore and his family. A&E made a 60 minute program all about Gilmore’s life, mentioning Mailer’s The Executioner’s Song. The 1,000 page novel takes on an entire new meaning after seeing a photograph of Gilmore’s rough, tired face. His cousin Brenda solemnly said, “He told me one time in one of his letters that the only affordable emotion you can have in jail is anger”. The entire book takes on a new life and shakes you with its reality after watching the interviews.
In this novel, there are so many themes that it can become overwhelming. Marriage, religion, death, the afterlife, family, human nature, the American dream, and today’s society are all messages that were touched on either lightly or heavily throughout the book. Some of the messages are obvious and good to learn from, but others lead you to find your own conclusion.
The biggest subjects talked about are death and religion, from the afterlife to the devil. ”Yes, he told her, if you murdered somebody, you might have to come back and the parents of that person in a future century. That was the whole point of living, he said, facing yourself. If you didn’t, the burden got bigger”. Gary was not a religious man, but believed in the afterlife after reading several books in jail. Throughout the book, Gary constantly says that he doesn’t know what happens after you die, but he isn’t afraid. “The thing about dying is that you gotta remain in control. Don’t be sidetracked by lonely forlorn spirits who call to you as you pass by – they may even reach and clutch, but I don’t really know”. The book is telling us that none of us really know what happens after you die, but it’s ok because one day we will all find out.

Another great theme is that we must watch out for the devils hand and everyone has a conscience. In a letter Gary wrote to Nicole, he says “Once you asked me if I was the devil, remember? I’m not. The devil would be far more clever than I, would operate on a much larger scale and of course would feel no remorse…” His perception of the devil seems to be very precise, and his awareness is admirable. Maybe if we all realized the devils presence we could “be a good girl and sit at God’s knee” as Nicole would say. Gary also says that the devil would “feel no remorse”, implying that he does, proving that even people who have done the worst of things have a conscience.

Why do we kill people who kill people, to show that killing people is wrong? The subject of what is morally right and wrong is an underlying theme throughout the book. One quote at the very end of the book, said right after Gary was killed sums it up perfectly. “Yet there won’t be any less murders…” This quote really hits home and makes the whole point of the book. Why exactly did they execute Gary? Did it solve any problems? Since his execution in 1977 there has been 117 more in the United States, just murdering murderers. Over all, the entire book is filled with messages that everyone can take a little piece out of and create their own theme.
Many people found the book to be one of Mailer’s best. Amazon.com says “Mailer took the material and produced an immense book with a dry, unwavering voice and meticulous attention to detail on Gilmore's life”. I agree with most of the reviews, I thought the book was a lot better than expected. The book impressed me with taking such hardcore facts and making them so descriptive and poetic sounding. Reading the back cover, the book seems to be all about murders and rape, but it took you through the life of Gary Gilmore and his lover as well, which I did not expect. The entire book sounded as if it was only a drama that Mailer conjured up in his head on a chilled rainy day. Overall I would recommend the book to others, but no one under my age because of the amount of sexual content and swearing. The writing allows the reader to become emotionally attached to a stone-cold killer and gets you questioning a lot of things, making this a great read.
In conclusion, Mailer took the life of a violent, lost man and turned it into a brilliant heart quenching story. The fact that Gary Gilmore insisted on dying for killing and robbing two men had made him famous in the end. He truly is a history maker, and will never be forgotten because of this in-depth personal novel about an absolute thief and killer. In the words of Norman Mailer, “Every moment of one's existence one is growing into more or retreating into less. One is always living a little more or dying a little bit.” 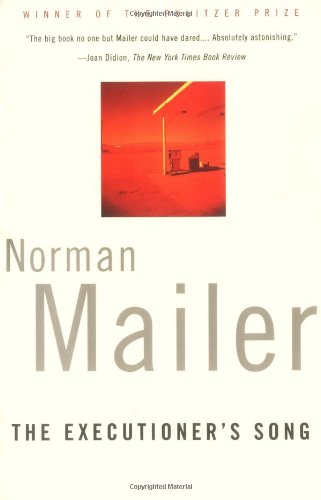