It’s easy to tell when a book has become a classic. Everybody’s heard of it. It’s read in schools. People spotted with their noses in its pages get labeled smart. But there are certain books which become, well, more classic than other. Books which work their way into public consciousness, penetrate the world of pop culture with such subtly they are not even noticed. This is the kind of book George Orwell’s classic horror story, 1984, has become.


I call it a horror story because it is terrifying. Don’t get me wrong, I love a good Stephen King thriller as much as anyone else, but with due respect to the common tales of terror, I admit I like to think of dystopia as the thinking person’s horror.

Dystopia of course means a dismal and bleak view of a future world. This often comes in the form of a crumbling or totalitarian society, and 1984 is the classic example of such a tale.

It centers around Winston Smith, who lives in Orwell’s horrifying vision of the year 1984. Winston works for the party, changing history to make the totalitarian, faceless rulers look good. He knows unquestioningly that one day he will be arrested for his quiet hatred of the system, but will never act to change things. That is, until he meets beautiful, young Julia and is drawn into a world of secret rebellion.

Unlike many dystopia novels, there is no spark of hope. It’s not spoiling much to say the book ends without any promise of change. There is nothing to say that the party and it’s enigmatic, possibly nonexistent leader Big Brother will not reign forever.

The book is heart breaking. The reader watches spellbound as everything that makes Winston and Julia who they are is ripped away. Love, thought, freedom, and self are all torn from them through heartless pain and cruelty. The future it portrays is more terrifying than any monster. But it is worth reading, to uncover Orwell’s warning, even more threatening as we walk under the security cameras, trying to remember who we are. 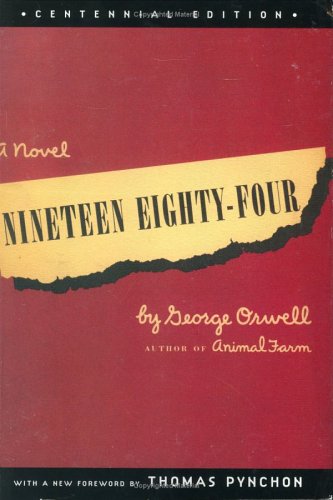