Odds are you’ve heard of the anime adaptation of this book. But did you know it was originally a novel by a British author?

Sophie is the eldest daughter of a hatter in the magical kingdom of Ingary, so she knows she’s destined to a nice, boring life while her younger sisters seek their fortune. Then the Wicked Witch of the Waste stops by her shop and turns her into a old crone, and Sophie decides she has nothing left to lose. She goes off in search of adventure, and somehow ends up on the magical moving castle of the “terrifying” Wizard Howl.

Sophie ends up making a bargain with Howl’s fire demon, Calcifer: she sets him free of his bargain with Howl, and he’ll turn her back to her old self. And she makes a deal with Howl, not entirely consensual on his part: she’ll clean his pig sty of a castle, and he’ll let her stay there. Of course, nothing’s ever that simple. Sophie gets tangled up in a mess of missing persons, species-changing persons, identity-swapping persons, royalty, and the Witch of the Waste’s old grudge…against Howl. Among other confusions. And revelations. Sophie ends up very busy indeed.

Howl’s Moving Castle is an easy read involving a convoluted plot told with delightful charm and matter-of-factness. It has two sequels, Castle in the Air and House of Many Ways 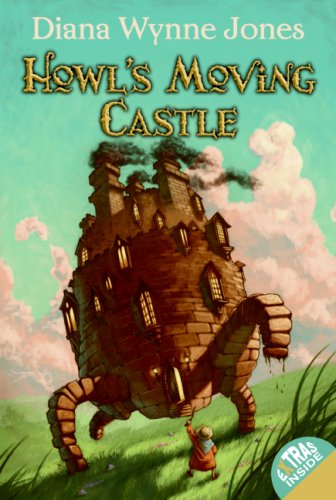