This book is more or less what the subtitle says: a Modern Faerie Tale. 16-year-old Kaye Fierch has spent her life traveling with her mom, a wannabe rocker, but after a creepy murder attempt by her mother's boyfriend, she returns to her grandmother's boring New Jersey suburb. Aside from her messed-up childhood, there's something else weird about Kaye – she's always been able to see faeries. Once home, she begins looking for her old “imaginary” faerie friends, but can't find them. Instead, she ends up saving the life of a ruthless faerie knight – and discovering a shocking truth about herself.

A combination of events draws Kaye into two centuries-old conflicts: the long-standing war between the Seelie and Unseelie Courts of Faerie, and the Solitary Fey's wish to remain free of either court. Everyone attempts to manipulate her to suit their ends, and although Kaye means well, it's very easy to get lost in the world of Faerie. She can only try not to drag her friends down with her.

There's romance here, but mostly the story is dark, gritty, even somewhat punk or goth. It alternates between the bleak suburbs and the lurid, grisly world of the Faerie Courts. The faeries here are no fluttery pixies: they're sadistic, downright homicidal creatures that consider humans far beneath their notice, as nothing but toys to break and discard.

Tithe has a companion book and a sequel, Valiant and Ironside, both with the same vivid descriptions and headstrong heroines as the first book. If you like this one, you'll definitely want a return ticket to Faerie. 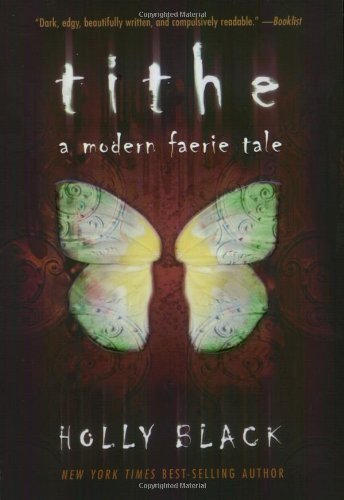