“Tonight, darling, we are going to right a lot of wrongs. And we are going to wrong some rights. The first shall be last; the last shall be first; the meek shall do some earth-inheriting. But before we can radically reshape the world, we need to shop.”

Quentin “Q” Jacobsen has been in love with Margo Roth Spiegelman for as long as he can remember. She’s the mysterious girl next door with whom he shared a terrifying experience when they were in elementary school. Margo Roth Spiegelman is the queen of the school, and she keeps everything running smoothly. Margo Roth Spiegelman only talks to Q in his dreams, but he wants so much more. So when Margo Roth Spiegelman appears in his bedroom window asking him to take his mother’s car and join her on an adventure at 11:30 on a school night, Q only hesitates for a moment before saying yes. Together they enact Margo’s plan for revenge, and when Quentin finally returns home just a few hours before his alarm goes off, he believes that his and Margo’s relationship has changed for the better, and maybe he really will get the girl of his dreams.

But then she disappears.

Margo Roth Spiegelman has left a series of clues that Q knows are just for him, but solving them and finding Margo turns out to be much more difficult than anything Quentin could have imagined. With graduation only a few weeks away, he’s not sure that he can find her before he walks down that aisle for his diploma.

Paper Towns is a character-driven novel that closely examines the mind of an obsessive teenage boy and his quest to find the girl he claims to love. Paper Towns falls into the category of “realistic fiction,” and anyone who feels ambivalent towards or simply doesn’t like realistic fiction will hate this book – I know I did. John Green has a spectacular writing style, but this book moved much too slowly for me, and there was a significant lack of action that made me want to put it down more than once. I would recommend this book only to high school students (both male and female) who are interested in realistic fiction and/or character development, or students who appreciate incredibly well-written novels, even if the plotline is a little boring. Otherwise, I would stay far away from this snooze-fest.

I GIVE THIS BOOK TWO OUT OF FIVE STARS 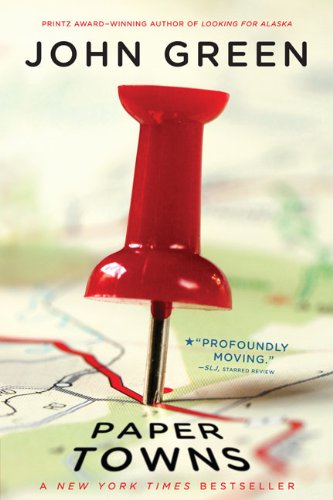 
Buy from Amazon
The author's comments:
I know most people absolutely love John Green and that they might consider my review to be a bit harsh, but I believe what I believe, and this book was disappointing.
Post a comment
Submit your own

Favorite Quote:
You will go to the paper towns and you will never come back ~ John Green

View profile
This book is so relate-able to people who have lived in one place all your life. You just want to leave and never go back. John Green is and will always be an amazing writer because he draws you into the story. Just like he did with Paper Towns. Great book i recommend it to everyone!