“You see, a conflict always begins with an issue – a difference of opinion, an argument. But by the time it turns into a war, the issue doesn’t matter anymore, because now it’s about one thing and one thing only: how much each side hates the other.”


The debate between pro-life and pro-choice escalated out of control and turned into a full-blown war that raged across the United States. The war only ended when the two sides came to a horrific agreement: abortion would become illegal, but parents could choose to have their children “unwound” once they turned thirteen. Unwinding is exactly what it sounds like: the unlucky person is taken apart piece by piece and their parts are given to other people who need them. The unwinds don’t technically die but are kept alive in pieces all over the country; some people even swear their new limbs and organs come with the previous owners’ personalities still attached. Any child can be unwound until they turn eighteen, and those whose lives have been signed away often try to run for their lives and beat the system until they’re legally adults. Few succeed.


Connor Lassiter is about to be unwound, and even though everyone says he’s still going to be alive in many forms, he knows that unwinding means death. He runs, and the Juvey-cops follow quickly behind. Connor quickly finds company in Risa, a fellow unwind, and Lev – a tithe whose only purpose in life is to be unwound at thirteen – and together they kick-AWOL, running from the Juvey-cops and trying to stay alive.


Unwind is an engaging look that will force its readers to acknowledge that there are things worse than the pro-life/pro-choice debate, and that a compromise on the two may not be the answer we want. It also touches upon other social problems we’re facing today, including organ donation and adoption. Unwind is entertaining and will keep readers wanting more, even after they’ve finished the book. I would recommend this for anyone in eighth to twelfth grade, and I think that anyone who enjoyed the Hunger Games will also enjoy this book.


I GIVE THIS BOOK FOUR OUT OF FIVE STARS 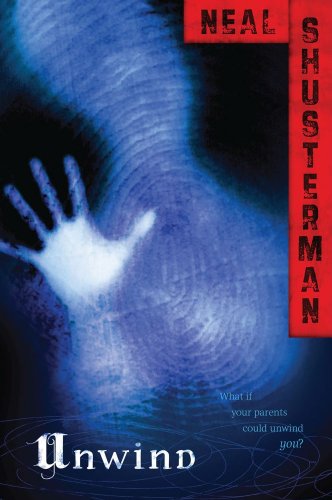 
Buy from Amazon
The author's comments:
This book examines what the future could hold for the United States, and I, for one, hope this isn't what happens.
Post a comment
Submit your own

View profile
Awesome job! You summed it up well!!