The Hunchback of Notre Dame by Victor Hugo | Teen Ink

The Hunchback of Notre Dame by Victor Hugo

Located in the heart of Paris, there is something both eerie and alluring about the Cathedral of Notre Dame. Its two stone towers, intricately designed, boast the beauty of medieval France’s architecture, while the gargoyles adorning it seemed to have been plucked from a nightmare. It is this majestic building that serves as the setting of Victor Hugo’s novel, The Hunchback of Notre Dame, and the story’s characterization and plot seem to foil the cathedral’s timeless beauty. It is no coincidence that this novel, published in the mid-1800s, has withstood the tests of time, and continues to inspire readers and artists alike, making it a must-read for all those who appreciate the beauty of the written word.

The story opens in medieval France, a time when the Roman Catholic Church dominated politics, the king surrounded himself in luxury while poverty permeated the streets, and executions were a spectacle as well as a regularity. It is from this climate that Hugo creates his three main characters- La Esmeralda, a beautiful and compassionate Gyspy dancer; Claude Frollo, the archdeacon of Notre Dame, an intellectual man with an unnatural taste for alchemy, and Quasimodo, the deformed bell ringer of the cathedral. These three characters are all outcasts of traditional Parisian society, but their interactions trigger a chain of events that could potentially throw all of Paris is a state of chaos.

For those familiar with the Disney adaptation of the movie but have never picked up the book, the story’s characters remain largely unchanged, but the plot line of the story is transformed radically. In the novel, Hugo is unconcerned with keeping the story family-friendly, and it explores darker themes of temptations and malice. Much like the movie, however, one of the themes involve society’s perception of beauty and ugliness, and how one’s appearance affects the way they are treated. Quasimodo is exiled for his deformities, causing him to become bitter and spiteful, while others, like La Esmeralda, are celebrated because of her grace and loveliness.

What continually draws me to this novel is its timeless themes, as well as the magnificence of Hugo’s writing style. Every character has a story, and the reader’s intrigue is held as layers of the characters are slowly peeled away, chapter by chapter. This story is a celebrated classic, but I believe its time for teenagers to pick up this novel, and discover the allure that has captivated readers for decades. For a book worthy of a Disney remake, this story is truly exceptional, as well a bittersweet tale that will make you smile as well as cry. 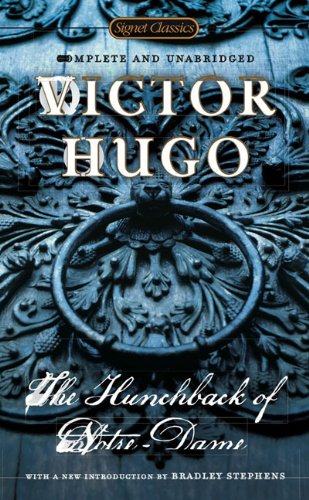 Favorite Quote:
"Reach for the stars, even if you have to stand on a cactus."
- Susan Longacre

View profile
wow. I(like everybody) have seen the disney movie, but never really thought about reading the book. You did an amazing job explaining the setting and characters. I'll make sure to check it out!