The Soloist by Steve Lopez

The true story and friendship of Steve Lopez and Nathaniel Ayers is The Soloist, a great read with page turning events. The friendship is a feat that is brought upon Steve one day by accident when he bumps into a homeless man, Nathaniel Ayers. Although he suffers from schizophrenia, Nathaniel is an amazing musician, with a history that journalist Steve wants to uncover. In the process he learns not only about Nathaniel, but about the many homeless people and people with mental disorders. This one event involving Mr. Ayers causes a domino affect which helps Mr. Lopez change the way other people think about homeless people, using the power of the press.
Cause and effect is a big part of this book. The way Steve writes the story, he also uses a timeline, but in an unusual way. He finds a way to incorporate flashbacks about Nathaniel in the story. Steve also incorporates events that were happening to himself at the time.The story focuses a lot on how music helped in the process of the friendship between the two. The theme has very much to do with music, and the way music was perfectly placed into the story was something that I really enjoyed. I also liked how truthful Steve tried to be, adding both good and bad points of being friends with Nathaniel. The book wasn’t just telling the details, instead it really made me picture what was happening between Nataniel and Steve. The friendship between the two was evident.
Stories of others living on the streets added to my love of the book. Even though the story is about music and friendship, it is a good read for anybody looking for a heart warming story with a few sad moments thrown in for good measure. A small act of kindness and interest in the world may lead to a long lasting relationship.
Although this chapter book can be too much like a journalistic piece, I think that overall it has the right amount of journalistic writing style in it and that it helped the story move along in a realistic fashion. The three parts of the story showed progression and change in the lives of Nathaniel and Steve, both in good and bad ways. But what stayed the same throughout the whole story was music, passion, and love. 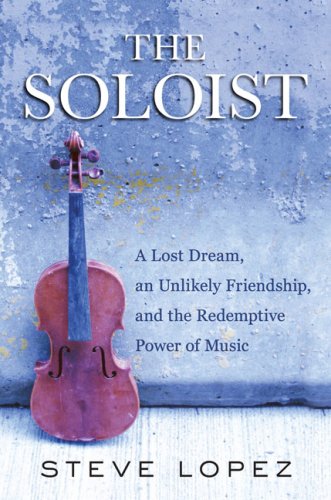