Have you ever been so into a book that it was almost like the characters were actually beside you? Chris Crutcher does a phenomenal job doing that in his writing, especially in Deadline. This heart pounding adventurous sports mystery is such a composed page turner that I strongly recommend this book to all teens. In Deadline, Ben Wolfe is entering his senior year at Trout High School, and the only thing stopping him from graduating is a disease he found out that he has. He decides to read everything he can, go out for football and chase the girl he has been after. After all he is only supposed to live for another year. In the book Crutcher does a spectacular job showing the struggles of a teen’s lifestyle; he makes the characters easy to connect with, and he relates to his own life experiences throughout the story.

Chris Crutcher uses a lot of his teen years to compose this story. He has also worked with numerous troubled and abused teens as a therapist and child advocacy worker. His writing is so down to earth with the characters; that most of what is in his books we have either heard about or witnessed ourselves. Working with teens is another key point in incorporating the lifestyles of his characters. He makes his characters learn from their mistakes and struggles in their lives, good or bad. For instance Ben often goes to Hey-Soos, a god like character for advice and to vent about his problems.

In Deadline, Ben’s character is easily connectable; teens can relate to how he struggles to tell people about his problems. Crutcher wrote, “I left a note saying, ‘I’ll be back. Don’t worry. Won’t do anything stupid.’ Then I drove home, put on my running gear and headed out.’ ” That was how Ben coped with his recent news of his illness. Ben contemplates telling his brother Cody, since he has such a big reputation and is an amazing athlete but he and Ben are inseparable; which makes Ben’s decision even harder. Oh, and Dallas how could he tell Dallas? Dallas is the girl Ben had been after for many years and finally started dating her. Ben doesn’t know that Dallas too has a secret and an extreme trust problem. That’s why I think Ben and Dallas had such a strong connection like sadness and chocolate. Every teen can say that they have been faced with something or are being faced with something that is just not easy to talk about or deal with.

Many of Chris Crutcher’s books are sports oriented with the games he or his kids have played. In the article Chris Crutcher Biography “Crutcher said,’ that he loved sports but didn’t become good at basketball until after 12th grade, he was a bench warmer. In track he was somewhere in the middle. Football was his best sport, only because it required less athleticism.’” That’s why I think Crutcher connects with Ben well. Ben is really good at cross country and turns to football, but his size makes everyone doubt why he came out for the team. The fact that he does a lot of work with teens helps to develop all of his characters; Rudy the town drunk and Dallas’s character really show his work in progress. Even though Rudy isn’t a teen, his youth was the center of his problems. He ties each characters struggle to another in how they would try to overcome them.

Chris’s books portray the struggles of teens’ lifestyles. He makes the characters relatable and he makes a personal connection to the characters and novel with his life experiences. I strongly recommend this book to all teens. Go long and pick up a copy of Deadline. 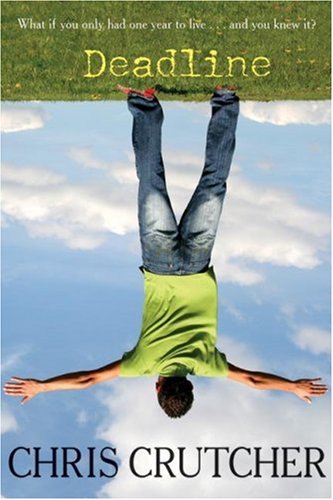