Have you ever been sent to a private school to spy on the teachers there? Well most of us haven't, but what would it be like if you did. Point Blank is a story about a boy named Alex who has to do this.


Point Blank is about a 14-year-old boy, who's uncle worked for M16, a British secret service. Alex's uncle died in the first book Storm breaker. The book starts out slow, as Alex chases a drug dealer, but once it started it barely slowed down. He gets in trouble for that and is sent to the police station were he is sent to M16s' building. Mr. Blunt, the head operator of M16, asks Alex to go to Point Blanc, a private school mainly for misbehaving upper class kids. The school is on the French-Swiss border. Alex has no way of turning this down. The problem with the school is when the kids got back to there parents they seem like totally different kids. M16 is very suspicious of Point Blanc.

To sell to the administrators at Point Blanc that Alex is a rich kids son they send him to Sir David, a wealthy man who has a daughter. At that house Alex has many close encounters with death.

Once at Point Blank meets a friend whose name is James Sprintz. Alex had a hard time not noticing that he seemed different then the rest. As you can see M16 had no problem getting Alex into Point Blanc the problem is trying to get Alex out…alive.
This is an outstanding book. Anthony Horowitz likes to use suspense, action, and in this book he puts a little mystery twist. I would recommend this book to anyone who enjoys a good action/adventure book. This book series (Alex Rider Adventures) was made into a hit British T.V. show.

Overall this is a suspenseful, action-packed, great story. I would give this book a 9 out of 10 just because of the two slow parts in it. Point Blank is one of my all-time favorite books; the only other ones I liked better are Where the Red Fern Grows and Old Yeller. 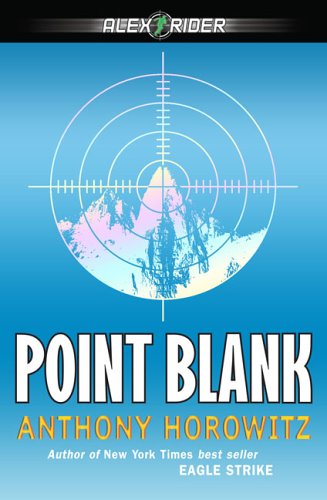